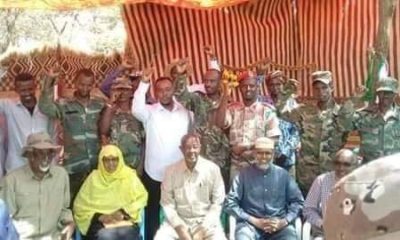 Government has reached an agreement with rebel group dubbed “Xaqdoon”, which recently declared to secede from Somaliland, but their grievances were resolved by peaceful means.

Both minister have announced at the ceremony that the feuding armed group has been ended.

The ministers have reiterated that due to the insecurity in the eastern regions of Somaliland, it is hampering the implementation of development projects as they are lagging behind the rest of the provinces which have consolidated its peace.

The ministers have disclosed that the government is preoccupied with the reconciliation of warring clans that are engaged on armed conflict.

The officials have reiterated further that the government’s expenditure in undertaking reconciliation process is much more in comparison to the funds earmarked for carrying out development projects in the country.

Gafaadhi said: ” Peace is a number one priority for development. If you cannot count on the security of the area you live. If everybody is concerned for the safety and well-being,and If you are feared that a stray bullet will hit you. Progress won’t be coming. We have utilized all the funds for the allocation of undertaking development projects in Somaliland and spent in buying bullets, fuel and armed personnel charged to intervene clans that are fighting . If we won’t lay down and keep fighting each other. We spent much more funds allocated to carry out development projects to to undertake the reconciliation of warring sides. We were supposed to build maternal and child health care centers, schools and police stations but the funds were used for reconciliation of feuding clans and armed groups in the country.”

SL interior minister has said that it is a joyous thing if the issue of rebel group has come to an end once and for all and it is peaceful now.

Kahin said: ” The issue really boils down to peace and security. If there is no stability, people will live in a state of hardships. Somaliland achieved progress over whether its security can be counted on. Schools and universities have succeeded in terms of consolidated peace. Aid will go to areas where there is genuine tranquility. The first priority for human life is peace and stability. If you won’t work with us on the consolidation efforts to enhance peace, there won’t be genuine progress in your region.”

It is noteworthy that the rebel faction dubbed Xaqdoon was stationed in Siraadly mountain in Sanaag region.