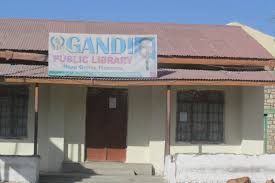 HARGEISA–The government led by President Bihi has launched an unprecedented campaign of confiscating all public lands that the ex-Somaliland president Silanyo sold to traders or businessmen.

The government of Somaliland on Wednesday has ordered the complete halt of former Gandhi Public Library site which is under construction. The site lies next to Hargeisa Main police station in the heart of the capital. Owner of Gandhi Public  Library was evicted from the building by Silanyo led administration and after it sparked a public outcry that the row was ended in a peaceful manner. Gandhi Public Library owners were given a block of land in order to appease them. Reports say that the government has stopped the site where construction was underway. It is believed that the government is willing to retake the lands that Silanyo’s administration offered to Al Harbi Trading company. The government rescinded the privatization of Berbera Oil Terminal, Egal Airport parking Services and Its security. The government also canceled the 20 year lease to Hargeisa Club Hotel which was handed over to private individuals. The government is said to be not happy with the number of years that the hotel was leased and that the individuals who have taken the hotel management have changed the name to Olympic Hotel.