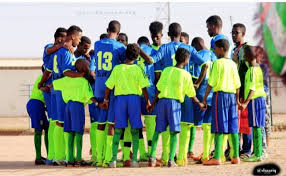 Buroa Municipality has refuted that its soccer team will visit Mogadishu for a friendly match.

Osman Mohamed Osman, the secretary of municipality said the local government football team will not play with other teams in Mogadishu.

In a press conference, that the municipality was not aware of and did not agree to such a decision.

He said: “This is shocking, indeed. Yes, the municipality has a football club. The club exists and plays on the name of the municipality of Buroa. However, we are not aware of this decision to travel to Mogadishu and play matches. If Djibouti agreement includes such provisions. Its organization, implementation and timing is up to the government.”

This comes a day after the municipality football club announced that they will travel to Mogadishu, the Somali capital in order to have friendly matches with local football clubs based in the capital.

The municipality stated that they will not let this opportunity to pass by in the provision in the accord signed between Somaliland and Somalia in Djibouti last week.

The agreement which came to the know of the public only on Tuesday incorporates articles allowing social integration and free movement of people between Somalia and Somaliland.