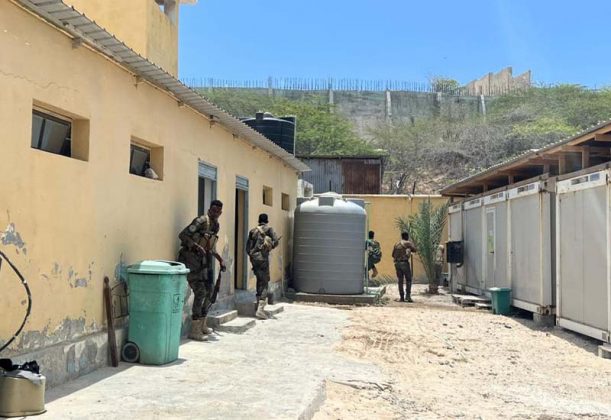 Somalia’s security forces killed two Al-Shabaab fighters who tried to enter the heavily fortified Halane base, which is home to several diplomatic missions including those of the United States, the United Nations and the United Kingdom, State TV reported on Wednesday.

The militants burst their way into the heavily guarded base and reached areas near UK and Chinese embassies inside the military facility and a hanger where an upcoming presidential vote is expected to be held, according to Universal Somali TV.

A witness at the base told Reuters news agency that he saw the attackers force their way into the gate and start shooting, and that a “number of injured AMISOM soldiers (were) lying on the ground”.

State media reported in the early hours of the attack that security forces were battling a “terrorist incident” at the gate of the heavy security base. Fighting also disrupted airport work as staff had ran for cover during heavy exchange of gunfire. Flights to and from Adan Adde Airport were halted and traffic on nearby streets was halted.

Al-Shabaab claimed responsibility for the assault, saying its fighters had killed a number of “white and black officers” and had torched buildings in Halane camp. Somali government and AMISOM peacekeepers have not yet commented on the claims.

Footage circulated online showed smoke rising from areas inside Halane base, though details on casualties are still scarce.

The attack comes just days before the African Union peacekeeping mission in Somalia (AMISOM) makes a transition to ATMIS under a new framework agreed with Somali federal gorvernment aimed at consolidating gains made since 2007 and helping Somali government achieve its transition plan.

Leader of Wadajir opposition party Abdirahman Abdishakur said the attack had been facilitated by elements within the government and that it was a “response to calls for holding an election for parliament speaker in Avisione tent”, an area inside Halane base which was targeted by the assault.

African Union peacekeepers had created a “green zone” inside the attacked base and nearby airport over the past weeks amid fears of potential attacks.

The attack on one of the highly protected zones in Mogadishu in a broad daylight is a sign of deteriorating security in the Somali capital as authorities gear up for holding a presidential vote in a hanger that itself came under attack.