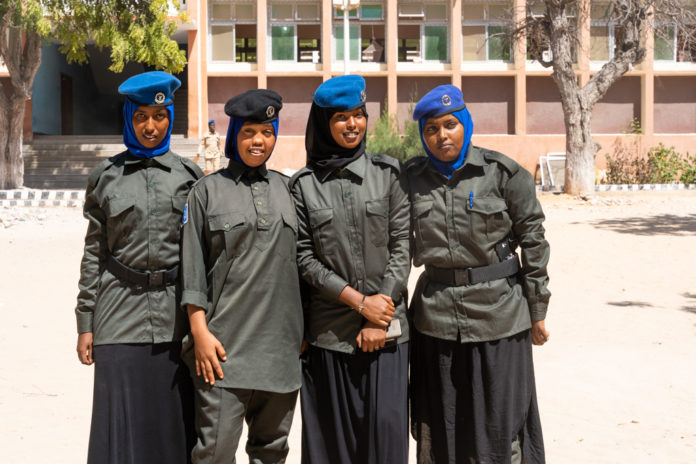 Maida Abdullahi says she has wanted to be a police officer since she was very young. She thinks though, in Somalia, when other women see female police, some may be happy but some may be shocked.  “They might say ‘why are they not at their homes,’ but I think that some will be proud to see us, will see that it is possible, and may be inspired to join the police too. I am happy with that,” she said.

Maida is one of thirty female officers who are training to be a special unit of the Somali Police Force (SPF) called the “Darwish”. There are 300 officers in her unit, and together with their male colleagues the women officers are being trained in tactical operations, such as threat protection, arms and field awareness, stop and search, and explosive ordinance disposal. The unit will deploy to areas liberated from Al Shabaab by the Somali National Army and by AMISOM (African Union Mission in Somalia), to join fellow Darwish in holding the areas and ensuring a quicker transition from a military presence to a civilian police based rule of law.

The women officers say they are determined to protect their country in the same way and with the same skills as their male colleagues, and that having access to the same training has been important for them.  Equal access to such training in an arena traditionally dominated by men, is perhaps a sign that things may be slowly changing in a country where participation of women in rule of law and decision-making spheres can be limited, and where rates of violence against women and girls is still high.

The women say though that having more female officers will mean that the police are better able to protect against gender based violence, and can mean that they can reach more people in communities. They nod in agreement with Maida that women in the police force can also serve as role models.

Maida also believes that it’s important that women join the police force to help fight against Al Shabaab. “Al Shabaab use women to carry weapons and explosives. I wanted to join so that I could help stop this, and I’m proud of that decision,” she said.

Another female officer, Hodan Hassan, said she is ready to be deployed when it is time, and although she knows there will be challenges, she wants to reach the top ranks someday.

“I have finished university and my postgraduate studies, and my goal is to reach somewhere higher in the police, and defend my country. Defending your country is not something simple, but I’m ready and will be able to work in whatever place I am deployed,” she said.

The Darwish are being trained by the Somali Police Force, by AMISOM, and by the Italian Carabinieri, with the support of the European Union in Somalia and the UN. Under the European Union umbrella, police experts from the EU Capacity Building Mission in Somalia (EUCAP Somalia) and soldiers from the EU Military Training Mission (EUTM Somalia) have provided joint advisory support to the training. The initiative is part of a transition plan agreed by the Somali Government and the international community in 2018, which outlines steps for handover of control from AMISOM forces to Somali security forces, including civilian police forces, by 2021.