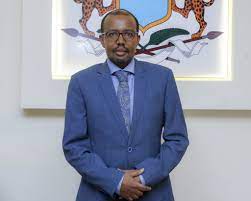 Somalia’s Foreign Minister Abdisaid Muse Ali held phone talks with UK Minister for Africa Vicky Ford during which he emphasized that the Horn of Africa nation was firmly committed to strengthening bilateral relations based on mutual respect for its sovereignty, territorial integrity and political independence, Somali Ministry of Foreign Affairs said on Tuesday.

The phone conversation has come hours before the parliament of the United Kingdom holds debate on the recognition of Somaliland, which broke away from Somalia in 1991 and has since been seeking an international recognition.

“The Minister of Foreign Affairs and International Cooperation, H.E Mr. Abdisaid Muse Ali, on Tuesday, spoke with UK Minister for Africa, H.E Vicky Ford, and discussed UK’s multifaceted support to Somalia including on critical humanitarian assistance, security and economic cooperation, and exchanged views on political developments in the Horn of Africa,” statement reads.

“Somalia’s Foreign Minister thanked to the U.K government for their enormous contribution to Somalia.”