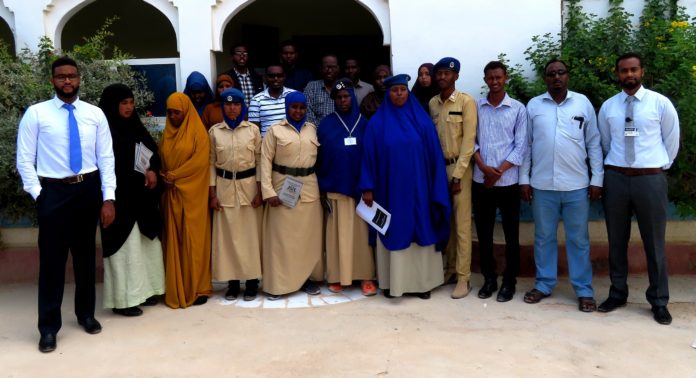 During the last few weeks, the Puntland Ministries of Justice and Woman Affairs, members of parliament, protesting women and girls in the streets of Garowe, all expressed their concern on the rising issue of rape crimes and expressed their dedication to fight this type of offence.  EUCAP Somalia’s Field Office in Garowe decided to support this fight against sexual gender based violence (SGBV) by developing training for the Puntland police, both on land and in a maritime capacity to learn how to deal with traumatized rape victims.

Puntland is the first state in Somalia with a Sexual Offences Act, known as “the Rape Act”. This act forms a solid basis for a law enforcement approach but until now, most victims get only limited support and police officers do not necessarily now how to handle these cases. In worst-case scenarios, as a Puntland police officer put it:  “A police officer can do more damage to the victim than the rapist by the way he behaved.

The goal of the first one-day course was to train police officers about their first response to victims of SGBV. On 21 April, the Head of the EUCAP Field Office Garowe, Cornelis Verhaeren, welcomed 17 police officers, eight of them were women, to familiarize themselves and learn more about this sensitive and demanding part of police work.

The training commenced with highlights of the legal framework for combating SGBV in Puntland and the legal basis of their first response to this type of crime. Next phase was an EUCAP-made video depicting a situation where a police officer does not behave correctly when a victim enters the station to seek help. The video caused strong reactions especially from the female officers.  Trainees shared their experience and were eager to know if they did the right thing. The Police trainer subsequently explained the proper way to deal with the victim and showed them another video on how police should behave.

Gathering of fragile evidence is another pivotal part in investigating sexual violence. The trainers demonstrated ways and methods used, as a first responder, to secure fragile evidence enabling DNA analysis. Also this module was supported with a video showing both the wrong and the right way to proceed.

“It is very necessary to inform the police officers at the front about this type of crime and to teach them to approach the victim in an appropriate way. Now evidence is lost because of incorrect handling,” said Master of Science Yasin Farah, Head of the Forensic Chemistry and Physical Evidence Section of the Bureau of Forensic Science.

“There is a gap of knowledge between the patrol officers, even the CID officers and the Bureau. This training fills that gap. We see it as a step forward,” he added.

As Sharia law is a part of Somali legislation, also the Sharia perspectives on the status of SGVB/TIP (trafficking in persons) victims were included in the program of the day. Shucayb Mahamud Adam, an intern at the Ministry of Justice and Religious Affairs, gave a vivid presentation on the subject, which was well received by the audience.

Colonel Mohamed Abdi Kismayo, Head of the Training Department of the Puntland police, said: “I have noticed that the trainees were excited about the training. This training really has added value to their work. We have to do more. I am already thinking how we can proceed this training tomorrow, given the limited possibilities we have. I consider this training as a pilot, which need to be spread to every police station in Puntland.”

At the end of the training, the Head of the Field Office and of the Police Training Department handed the certificates to the trainers and trainees, to symbolize the joint effort of this exercise. The trainees were also given special posters to put in their police station “to spread the message”.

“The training has ended but your work has just started. We hope that you spread your knowledge to your colleagues and put the posters in the police station so that your colleagues might come with questions,” stated the Head of EUCAP Field Office. “You will have the answers now. I also hope that you put a poster for the public to see, so that the people in your community can see that the Puntland police cares about victims of rape. That you want to help them the best you can and help to bring the perpetrators to justice.”

“I have learned about the law. I have learned how to handle and give advice to the girls at first response. I can now even advice policewomen of higher rank about what I have learned,” said Amal Abdirahma Samator, Police officer of the Community police in Garowe.

“I can use this in my daily work. I hope to learn more about this, so that I can deal with these rape cases,” she said.

We did it together

The training day went smoothly and it might look easy to arrange a course like that. But the actual course day was preceded by lot of work and cooperation between EUCAP Field Office experts and Somali partners. The subject was sensitive and EUCAP experts wanted to hear the views and advice from the minister of Women and Family Affairs, experts on the Sharia, notably the Dean of Puntland State University, the Head of the Puntland Police Training Department and National Bureau of Forensic Science in Garowe, as well as EUCAP Somalia colleagues in the Mission Headquarters.

Dariusz Sielicki, Legal Advisor Field Office Garowe, explains: “In my meetings with the Vice minister of Justice, I learned that the government wants to review and reform the Puntland laws. I feel obliged to help them to the best of my ability. For this training, especially the legal part, I had to do proper research of the laws with regard to the rights of victims of sexual offences. The Sharia law is also an important part of the Somali legislation. We cannot make mistakes. We have to present and explain the correct interpretation to our police trainers and trainees.”

The result was a training concept that opens the eyes of the participants and gives them useful guidance in their work. They were also delighted to see that the trainers were Somalis. Two Puntland Police officers, one male and one female, already trained by EUCAP, acted as trainers and two EUCAP interns from the Ministry of Justice supported the development of the course module.  Seeing their enthusiasm and dedication to deliver a good job, we got the feeling that we were on the right track.

“I am pleasantly surprised. I did not expect that from the police. I was also surprised to see that the training was presented by Puntland police officers. I find it a very good idea. As lawyers we deal of course with this type of cases. We defend the rights of the victims”, said Fartun Ali Jams, Lawyer, Chairlady of the Women Lawyers Association in Puntland, who was observing the course.