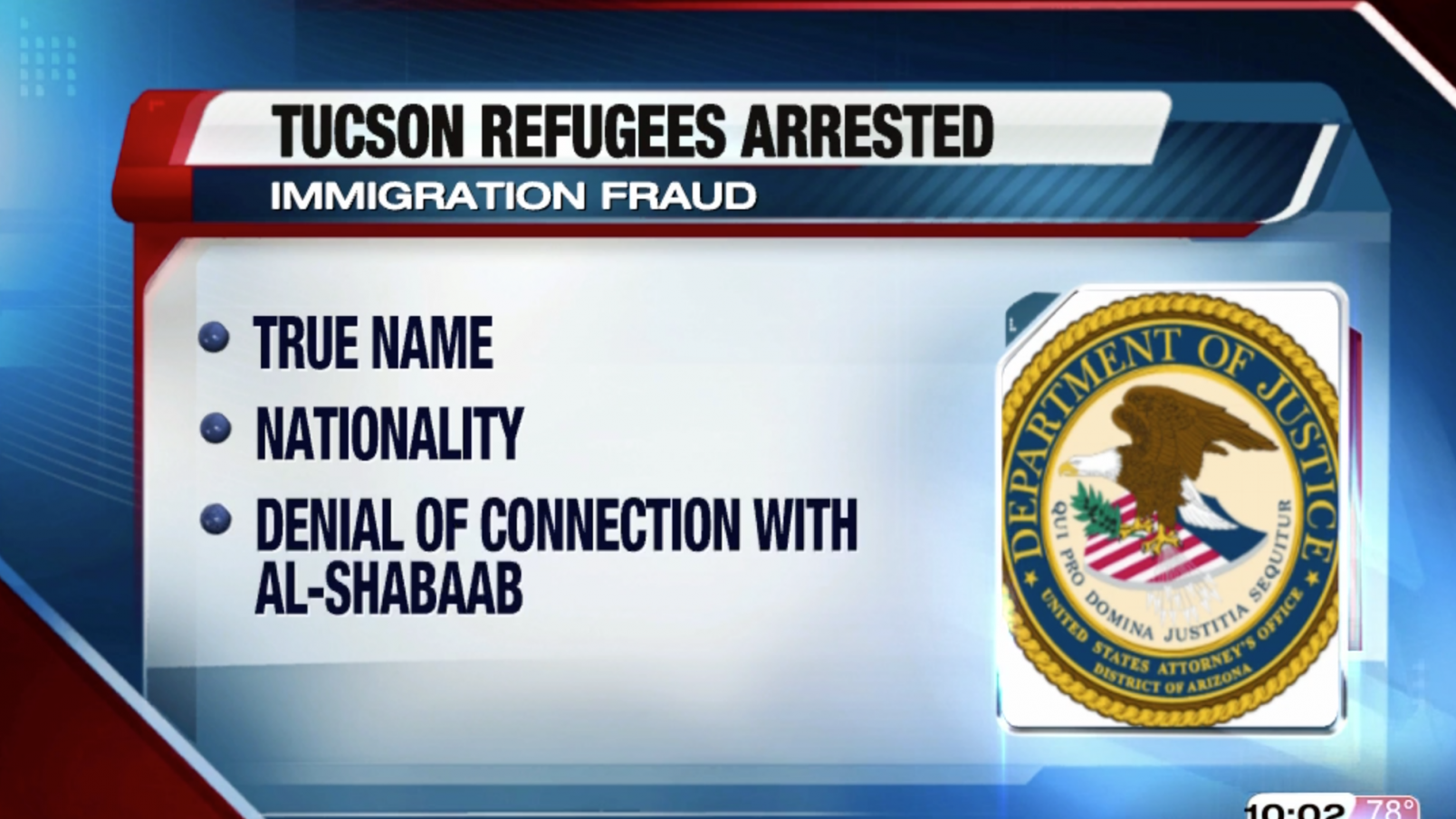 Immigration fraud is at the heart of a terror case . . . again. 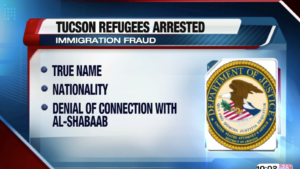 Once again, immigration fraud has compromised U.S. national security.  Fortunately, this time, the discovery was made before a deadly terror attack.
The issue of immigration fraud was the focus of both an extensive article and a booklet I wrote on the topic, Immigration Fraud, Lies That Kill.
This time an alien couple stands accused of fraud when they entered the United States as refugees, and then applied for legal immigrant status, but they hid their ties to Al-Shabab, an Islamic militant group operating primarily in Somalia who itself has links to al-Qaeda.
The case we will examine today, less than one month before the 17th anniversary of the terror attacks of 9/11, was brought to fruition by the Joint Terrorism Task Force (JTTF) as a result of the diligent work of the FBI and a division of ICE known as HSI (Homeland Security Investigations).
As you read my commentary think about the globalists – particularly the leaders of the Democratic Party who refuse to work with ICE, creating “Sanctuary Cities” and “Sanctuary States” and are now demanding that ICE be utterly and totally dismantled.
As you read my commentary, think about how New York State’s Governor Cuomo who, according to an April 25, 2018, Daily News Report made this unfathomable statement:

Because they (ICE agents) are in plainclothes, Cuomo said, many in the community believe them to be local law enforcement, with whom they are now afraid to deal.
Cuomo said he was assembling a “statewide” network of “rapid response teams,” including “legal counsel,” who could be quickly dispatched in a crisis situation.
“We should be able to get legal counsel there as quickly as possible,” he said.

Since Cuomo is a lawyer, perhaps he should show his true commitment to his “values” and personally lead the charge and represent these alleged terrorists and, once again, demand that the ICE agents, in this case, be punished for protecting the citizens of our nation.
On August 10, 2018, the Office of the United States Attorney for Arizona issued a press release, Tucson Refugees Arrested For Immigration Fraud.  Here are the first two paragraphs of the press release:

TUCSON, Ariz. – On August 8, 2018, a federal grand jury in Tucson returned an eleven-count indictment against Mohamed Abdirahman Osman, 28, and Zeinab Abdirahman Mohamed, 25, both living in Tucson, Ariz., for violations of false swearing in an immigration matter and false statements to a government agency.

The indictment alleges that Osman and Mohamed, while living in China, applied for and were granted refugee status in 2014.  The husband and wife entered the United States and have been living in Tucson since the time of their entry. In June 2015, Osman and Mohamed submitted applications for Legal Permanent Residence Status to U.S. Citizenship and Immigration Services.  The indictment further alleges that material submitted in support of their refugee applications and their applications for Legal Permanent Residence Status contained false, fictitious, and fraudulent statements.  The alleged fraudulent statements included Osman’s true name and nationality and denial of his association with members of a designated terrorist organization. Both defendants were arrested on Aug. 10, 2018.

On August 11, 2018, a local Arizona newspaper posted a report about the investigation and subsequent arrest that fleshed out more and disturbing details.  The report, Man with alleged link to Somali terrorist group arrested in Tucson, includes this excerpt that provided additional insight into the allegations contained in the indictment:
The indictment states Osman gave false information about his name and nationality, telling immigration authorities he was from Somalia, when in fact he was from Ethiopia.
He also denied being associated with a terrorist organization. The indictment states Osman later admitted that he was recruited to join the terrorist group al-Shabab and had moved from Jijiga to Mogadishu, Somalia, at the direction of the terrorist group. He also later admitted to knowing several members of the al-Shabab organization.
Prosecutors allege Osman also lied to an immigration officer about being injured in a bomb blast in a Somali market in 2010. The indictment said he was injured in 2009 while handling explosives.
Let’s now think back to the last Presidential campaign when then-candidate Trump insisted that as president he would make certain not to permit aliens to enter the United States if we could not properly vet them or, as I believe he put it, “Until we know what the hell is going on!”
Let’s not forget the yelps and howls from the immigration anarchists about Donald Trump’s promise to “Keep America Safe Again” by prohibiting aliens linked to terror-sponsoring countries and whose identities and possible affiliation with terrorist organizations, from entering the United States.
Let’s not forget how the mainstream media still falsely claims that the entry restriction, as I prefer to call it, was about preventing the entry of Muslims.  This has always been, and continues to be, about keeping terrorists out of the United States.
On June 27, 2018, CNN reported that the Supreme Court had finally acceded to President Trump’s “Travel Ban” which should have more properly been referred to as an “Entry Restriction.”The countries on this list are:  North Korea, Syria, Iran, Yemen, Libya, Somalia, and Venezuela.
The defendant, in this case, Mohamed Abdirahman Osman, allegedly claimed to be a citizen of Somalia, proffering a passport from that terror-linked country in the assumed identity of Mustaf Adan Arale when, in reality, he is a citizen of Ethiopia.
Had all aliens from Somalia been barred from entering the United States in 2014, as Somali citizens now are, per President Trump’s proclamation, Osman and his wife would never have been admitted into the United States.
We are fortunate that their alleged involvement with terrorist organizations was discovered before they had an opportunity to carry out an attack, if that was, in fact, their goal.  It is certainly disquieting to consider that, according to allegations contained in the indictment, that Osman had injured himself years ago by handling explosives.
The obvious question that must be asked is how this couple managed to successfully deceive the consular officials when they applied for refugee status in 2013.  I would hope that the Office of Inspector General will conduct an investigation into the paper trail to determine if any misfeasance or malfeasance was involved.
Of course, it is entirely possible that all of the officials acted in good faith and made their decisions with the best of intentions and lacked access to the information that they needed.
If this is the case, then it is essential that efforts be made to improve the adjudications process including the sharing of intelligence that may help to prevent similar instances of fraud from compromising the integrity of the process, thereby undermining U.S. national security.
This case is not, however, an isolated case and the nexus between immigration fraud and terrorism was well known even before the terror attacks of 9/11.
On May 20, 1997, I participated in my first Congressional hearing. That hearing was conducted by the House Subcommittee on Immigration and Claims and was entitled: “Visa Fraud and Immigration Benefits Application Fraud and was predicated on two deadly terror attacks carried out in the United States by aliens in 1993 at the CIA and at the first deadly attack at the World Trade Center.
The nexus between immigration fraud and terrorism was well documented by the 9/11 Commission.  Consider these two paragraphs from the official report, 9/11 and  Terrorist Travel:

Terrorists in the 1990s, as well as the September 11 hijackers, needed to find a way to stay in or embed themselves in the United States if their operational plans were to come to fruition. As already discussed, this could be accomplished legally by marrying an American citizen, achieving temporary worker status, or applying for asylum after entering. In many cases, the act of filing for an immigration benefit sufficed to permit the alien to remain in the country until the petition was adjudicated. Terrorists were free to conduct surveillance, coordinate operations, obtain and receive funding, go to school and learn English, make contacts in the United States, acquire necessary materials, and execute an attack.
*     *     *
Thus, abuse of the immigration system and a lack of interior immigration enforcement were unwittingly working together to support terrorist activity. It would remain largely unknown, since no agency of the United States government analyzed terrorist travel patterns until after 9/11. This lack of attention meant that critical opportunities to disrupt terrorist travel and, therefore, deadly terrorist operations were missed.

The enforcement of our immigration laws from within the interior of the United States is, as the above-cited report noted, critical for national security.  The case that serves as the predication for my article today represents just such an example of effective interior enforcement, as are the cases I noted below.
It’s the interior enforcement of our immigration laws that Cuomo, Pelosi and a considerable number of other immigration anarchists have been vigorously obstructing for many years, and now want to be terminated entirely.

My recent article, Congressional Hearing: Iranian Sleeper Cells Threaten U.S. was predicated on a hearing conducted on April 17, 2018, by the House Committee on Homeland Security, Counterterrorism and Intelligence Subcommittee, on the topic, “State Sponsors Of Terrorism: An Examination Of Iran’s Global Terrorism Network.”

In spite of all of these existential threats to the United States, arguably the most dangerous and pernicious fraud perpetrated on Americans are the lies of the globalist politicians and their “journalist” cohorts about our immigration laws.