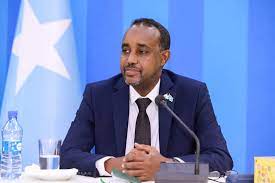 Somalia’s PM Mohmed Husein Roble on Tuesday promised that the perpetrators behind the murder of a female spy will be prosecuted and once again called on the military court to accelerate the investigation into the case.

Speaking at a event where candidates vying for senate seats allocated for Somaliland were due to begin campaign speeches, Roble admitted a row with the acting president and soothed public fears over more violence and unrest as a result of the renewed political tensions.

He insisted on that the wrangling will not stop him from pursuing for Ikran Tahlil Farah, whose family lodged a case at the military court and asked for an arrest warrant to be issued for all the suspects allegedly in connection with the killing, including the ring leader and former spy chief, Fahad Yasin and several of his aides.

Roble said that holding elections is a top priority for him until a new president is chosen and urged regional states to begin the election of Lower House despite Farmajo’s move of suspending PM’s powers to appoint and dismiss officials.