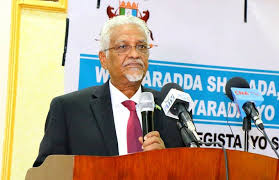 Puntland Vice President Ahmed Elmi Osman a.k.a. Karaash has disagreed with his boss Said Abdilahi Deni over engaging talks with Somaliland in an attempt to resolve the territorial spat between the two states. According to a press statement issued from the Vice president’s office in Garowe has clearly stated that the unity of Puntland territorial regions are enshrined in the constitution. The VP said that Puntland borders and regions won’t be negotiated, violated or divided. Karaash said in the statement that the gov of Puntland’s sole duty is to maintain the security and to defend its territorial borders. The VP promised to fulfill the pledges that they have been elected to carry out as endorsed by its parliament. He further noted that he is committed to implement that program which he was elected for.

Mr. Ahmed has stated that he will not sit still until the regions under Somaliland control will be emancipated. He went against opening unconditional dialogue with Somaliland over the disputed regions of Sool, Sanaag and Ayn regions which Puntland claim by clan affiliation.