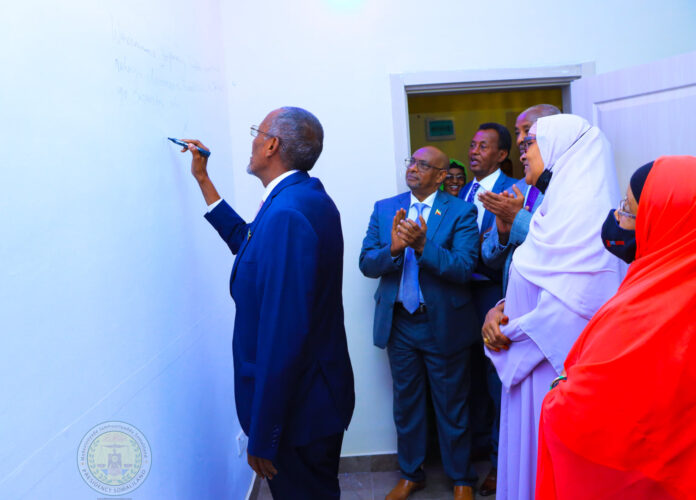 The state will seriously address the gender-based offences henceforth.

The convectional sentiments were noted by the Head of the State H.E. Musa Bihi Abdi, as he graced a function inaugurating an established national office to address the matters of gender-based offences.

The highly organized function courtesy of the Nagaad Umbrella Network is a new direction for the nation to address the issue that sometimes borders controversy.

“Happy am I to grace this occasion hence salute all guests at this function that establishes an office to address the gender-based offences,” said the President.

He noted that the anathema has been a soar issue that compounded especially over the past three decades.

He decried that the matter has never been brought formally to a broad, impacting and tangible forum.

“If anything, I sought to address the matter at the Information Ministry’s hall when Waran’ade was the then minister and called for the issue of women rights vis-à-vis gender based offences to be discerned,” said H.E. Bihi.

While acknowledging the controversies surrounding it as far as the issues were concerned, the President was categorical that an intensive and extensive dissemination campaigns would be indulged to put the matter on perspective and the nation on toes.

Said he, “As the government we shall do the dissemination on the issue and the legislative and the clerical members who oppose the matter and those who are moderate will have to come to terms with the facts since the religion itself is against gender based offences.”

In other words, ways and means of disagreeing to agree was indispensable.

He lamented that such ills against the women and other vices were what nurtured droughts and famines, since what goes come round.

He noted that there was overlapping apprehensive as far as the lines between basic humane women rights versus gender-based offences were concerned.

On the other hand, the President decried the fact that the populace was subjected to wail for handouts and alms whenever drought and famine struck, something he noted, as being demeaning to the nation’s integrity.

He called for residents in the rural areas where there is pasture and water to welcome their brethren pastoralists who were searching for them as they move along with their livestocks.

He likewise decried the fact that since the state declared the drought alert in January, he said notable intervention from the international community has not been forth coming.

Upon the opening of the building’s wing of the offices that would address the gender issue, the President signed the visitor’s book.

He echoed the words of FM Dr. Keyd that no country on earth can sway, arm-twist or dictate on the nation’s aspirations since the convictions are people-driven, as he scoffed on Somalia efforts to step up the fight against Somaliland following the country’s Taiwan visit.