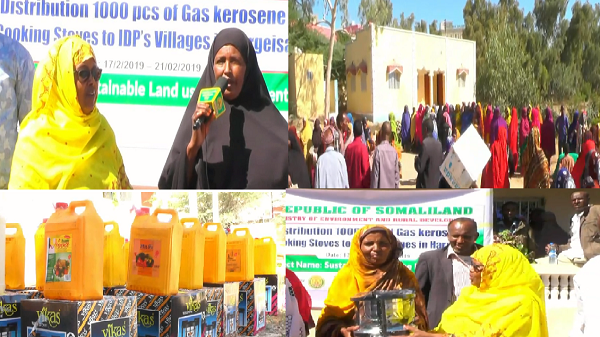 HARGEISA– Ministry of environment and rural development distributed 200 kerosene cooking stoves to IDP’s currently living in Digale village which is located in north of the capital. The ministry is also planning to distribute other villages resided by the IDP camps in Hargeisa. The minister responsible for the environment, Ms. Shukri Ismail Bondare said in a remarks at the ceremony that the objective is to reduce the banking of firewood in terms of cooking. Ms. Shukri has remarked that it is not the first attempt that the ministry has distributed cooking stoves aimed at reducing the dependency of firewood for cooking. The IDP families were also apprised to come to the ministry and fetch the plants so that they will plant in their village. The ministry of environment in conjunction with GTZ which is funding the project is intended to reduce the heavy use of firewood in Somaliland.