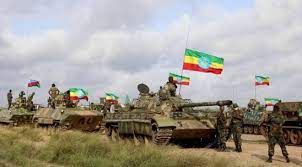 Militants have attacked military bases manned by Ethiopian and Somali govt troops in the town of Baidoa in Somalia’s Southwest state, which is hosting partially disputed parliamentary elections.

More than 10 mortar bombs targeted on Ethiopian base in the restive town on Monday night before troops responded with heavy artillery fire, triggering panic among locals who described hearing loud explosion overnight.

An attack on a base housing gov’t troops in the town followed and both sides exchanged heavy gunfire in an ensuing fighting that lasted for more than an hour.

Casualties on the assailants and troops on the targeted base have not immediately clear, but there are injuries sustained by civilians as a result of the gunfire exchange.

A few days ago mortar shells hit the regions presidential palace in Biadoa where voting for a number of parliamentary seats was underway, causing hours of delay in the process.