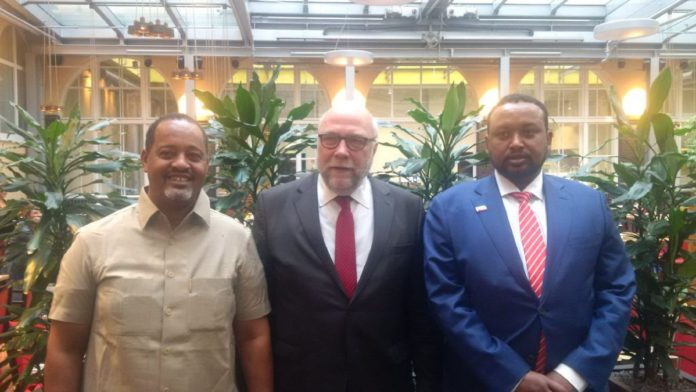 On February 14, 2019, Mr. Günter Nooke met a delegation from Somaliland. These included Abdirahman Mohamoud Aideed, mayor of Hargeisa, and Abdishakur Mohamoud Hassan, mayor of the port city of Berbera, as well as Ayan Mahamoud, representative of Somaliland in the United Kingdom and the Commonwealth, and Mohamed Abdi Hashi, executive secretary of Somaliland.

At the center of the discussion were the municipal structures in Somaliland and the challenges they face in terms of social welfare, infrastructure and economic development. The representatives reported on the difficulties but also the successes.
European and German development cooperation is being carried out in Somaliland in important areas, such as basic water and sanitation and vocational training (the latter as a GIZ project). This is of particular importance given the very young population and high youth unemployment in Somaliland and should be further promoted. Other GIZ projects include the construction of a Hargeisa-based road and resilience enhancement in the context of drought in Berbera.
A major challenge, the mayors report, are the crop failures caused by severe drought and hurricanes and the loss of livestock. These have led to high numbers of internally displaced persons, to which would return added Somali refugees and refugees from, for example, Yemen. In addition to questions of health, food security or urbanization, of course, there would be a constant question of security. However, given that more than 50% of Somaliland’s budget was invested in “security”, the guests reported a very positive outcome.
Furthermore, questions of economy and employment were discussed in conversation. The mayors referred, inter alia, to investments in the port of Berbera and subsequent infrastructure, which leads to further income and job creation.
Also in terms of municipal structures, representatives from Somaliland stressed a high degree of democratization. They continued to report on programs designed to empower women in political positions and leadership positions. This is also followed by efforts to introduce a women’s quota for the parliamentary elections.

As part of a business trip to East Africa in early March Günter Nooke plans a visit to Somalia. After a stop in Mogadishu it will go to Hargeisa and Berbera in Somaliland. Mr. Nooke looks forward to a visit to the mayors and the opportunity to talk to political and business leaders, visit projects and learn more about the local situation.