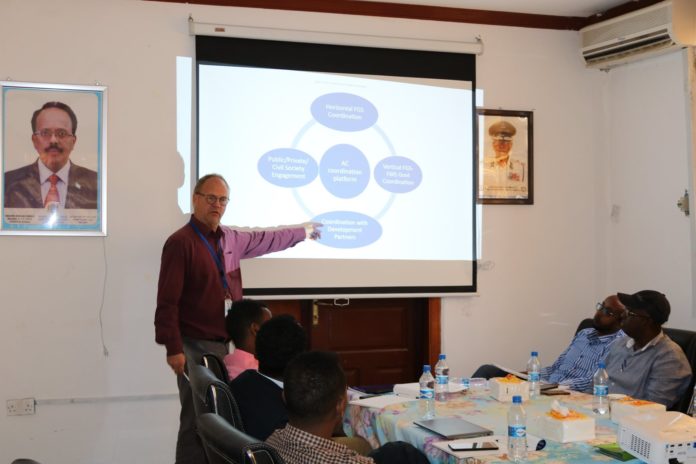 Corruption scares off investments. It creates instability by affecting the funding of the security sector.
If police and soldiers do not receive salaries to support their families they cannot remain committed to their jobs, potentially creating a security vacuum.
In any country, corruption has a direct effect on the wellbeing of men and women, boys and girls, deprived of services they are entitled to, due to the wrongdoing of some.
These effects are felt especially more where public resources are scarce, in fragile and developing states.
According to worldwide corruption statistics, Somalia remains at the bottom of the list, year after year. Yet, the vast majority of Somali officials are committed to the institution-building of their country and risk their life on a daily basis to carry out their duties.
So, how can Somalia find its way up from the bottom of the corruption ranking?
Several actors from the Somali criminal justice chain discussed this issue yesterday during a workshop supported by EUCAP Somalia’s Rule of Law Advisory Unit in Mogadishu.
The workshop focused on the criminal justice response to corruption in Somalia by looking at best practices, as a way forward.
The meeting was organised in the context of our Mission’s initiative to support cooperation across the Somali criminal justice chain. The purpose of the event was to facilitate exchange, on a practical level, on lesson learned and best practices between investigative and prosecution authorities.
Representatives from the Criminal Investigation Department (CID) and Counter-Terrorism Unit (CTU) of the Somali Police Force, the Attorney General’s Office (AGO), the Office of the Auditor General (OAG) and the Financial Reporting Centre (FRC) participated in the meeting, alongside UN experts.
During the workshop discussions touched upon development expected by the establishment of the Anti-Corruption Commission, based on a law adopted by the Somali Parliament last week.
The participating institutions reiterated their commitment to building the capacity of the Somali criminal justice chain as a key component of the overall effort to fight corruption and illicit money flows.
Eucap Nestar