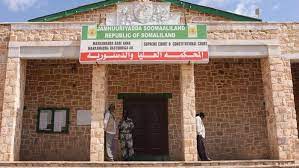 This past Saturday, July 16, Jamal Jimaale, an attorney, the son of the first SNM leader, the late Ahmed Jimale, died of a gunshot wound on the left skull of his head, in his Hargeisa house. Jamal was right-handed.

The reports are sketchy, but according to his relatives, he had a protracted land dispute with a perpetrator, who is well-connected to the ruling Kulmiye party. The court litigation has been going on since 2012 over the ownership of parcels of land on the west side of Hargeisa, Somaliland’s capital.

We lost one of our brightest people in the country because of dispute over a parcel of land that he inherited from his father, Ahmed Jimale, the former Hargeisa mayor during the civilian government.

Ahmed Jimale was dissident, and the military dictatorship sentenced him 4 years in prison, for refusing to co-opt with the military regime. He fled into exile in 1975 to fight against Siad Barre’s tyranny.

But so far, as always, the police have not arrested or questioned any suspect for this murder, including the alleged perpetrator of the crime. The government is trying to sweep the murder under the rug, but the family have refused to bury Jamal until investigation of his death is done.

Jamal has been harassed and intimidated by criminal thugs and rogue policemen hired by the perpetrator, and was hiding from them, according to his relatives.

The judges and the police were conspiring with the alleged perpetrator because of the clan identity politics. The appeal court has ruled the ownership of land to the perpetrator, and issued a two-year sentence against Jamal, plus ordered him to pay the court cost and the legal fees. So far, we do not know what the charges were against him.

But the Hargeisa local government land resolution unit has reversed that ruling and declared that Jamal is the rightful owner of the parcel.

However, according to the relatives of Jamal, the Minister of Interior, Mr. Mohamed Kahin, decided to get involved in the case and vacated the Hargeisa municipal government order.

The killing of Jamal in Hargeisa last Saturday has brought to the fore the high stakes involved in land grabs in Hargeisa. In Hargeisa, a lot of people have been killed or injured because of deadly violence over land disputes. Our judicial system and police are broken and corrupt.

The judges and the police are crooks who take bribes from all the litigants, and they are complicit with the violence emanating from the land grabbers. They collude with land grabbers. The trials for the land disputes usually are long, and sometimes take years, to reach a verdict. In fact, I was involved in a land dispute, and I had a horrible experience.

An entrenched, greedy merchants are also fueling the violence of the land disputes. These  merchants have repeatedly used the politicians, courts, and the police as a conduit to illegally grab public and private lands, and buildings, including a public library near Hargeisa Central police station, schools, and police stations.

But most troubling of all however, in this case, is the involvement of the Interior Minister. Mr. Kahin, who runs a sprawling agency including the coast guard, immigration Department, the police, the local government and rural affairs, and election matters.

Why is Mr. Kahin, whose main job is public safety and national security, getting involved in a local land dispute in the first place?  This is unusual, we need an investigation on why he is obstructing justice and abusing his power!

The wheel of justice is usually slow for the victims of murder, rape, and other heinous crimes. Our justice system is not working, and it is failing our people, including the sons and the daughters of the men who fought for our freedom.

Why is the alleged perpetrator getting special treatment? We need answers from our government. Who murdered Jamal? Why was Jamal murdered?

We are also demanding from the Bihi administration, at the very least, to appoint a special prosecutor to do a thorough investigation the murder of Jamal and arrest all suspects of this crime.

The Minister, Mr. Kahin, must recuse himself from the investigation of the murder because he has already aided and abetted with one side of the case.

Since Jamal was a Canadian citizen, it is prudent for his family and relatives to ask the Canadian consulate in Nairobi for help with the police investigation. Because Somaliland police forces are ill-equipped and have no capacity to do a crime scene investigation.

We do not have forensic labs to do a murder investigation. Moreover, we do not even have a functioning coronary or medical examiner’s office to determine the cause of the death.

We lost a man who could have been the next Attorney General of Somaliland. But it is the land grab of a greedy individual colluding with corrupt court judges, the police, and the Powerful Interior Minister that cost Jamal his life. We should not tolerate the killing and maiming of people over their own rightful lands.

It would be a gross injustice for the victim and his family if law enforcement fails to hold the perpetrator and their thugs accountable. If justice is not administered for Jamal and his family, people will then have to take justice into their own hands, resulting in increased levels of mob violence.

We will not see justice until the government arrest, indict, and convict the perpetrator or the perpetrators of this heinous murder. Justice delayed is justice denied.