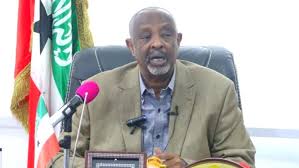 He also advised the public to have a high sense of patience with the statements made by officials in the public offices.

Mohamed Kahin said that the government officials and the civilians are under pressure which sometimes tempt them to poke fun of each other.

The interior minister said that the main factor in some regions of Somaliland to develop faster than other regions is the security concerns.

He confirmed that the development projects which were supposed to be carried out in Sanaag province have been postponed for reasons pertaining to security concerns.

Kahin also urged the public to work together for the development of the country.

The deputy interior minister made comments on Sanaag province which the residents from Sanaag have taken aback and described as a hate speech.