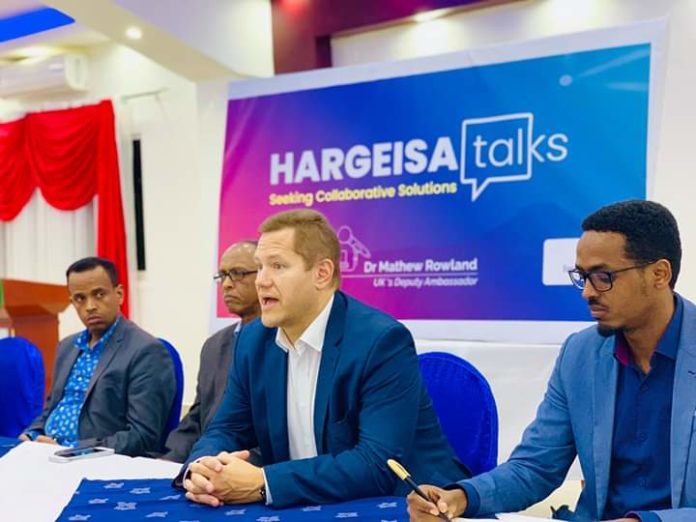 We, Inspire Group, are delighted to have successfully launched our new series of #HargeisaTalks on 11th Feb 2020. The aim of these talks is to promote our mission to facilitate open debate and seek collaborative solution across the Horn of Africa and the globe.

This is a platform for Diplomats, academics, and politicians to share their thoughts of the region’s critical issues, and also listen to local intellectuals’ views and concerns. It is a forum for candid, but civilised, exchange of views that looks into socio-economic, diplomatic and political matters that are of interest to the stability, prosperity and development of the Horn region.

We are honoured to have Dr Matthew Rowland, UK’s Deputy Ambassador to Somalia, as our first guest speaker. Dr. Rowland had scholarly and frank and interesting discussion with a group of Somaliland intellectuals, civil society representatives and members of the Chevening Alumni. The conversation mainly focused the following areas of UK’s Development role in Somalilandl the regional geopolitics and the impact of Brexit on the UK Foreign policy, and the Chevening Scholarships. Other important issues like governance, democracy and Somaliland election were also debated and opinions shared.

The intellectuals asked the Ambassador questions about UK’s position on Somalia and Somaliland case, and the recognition of Somaliland, and the Ambassador reiterated his government’s view that the two sides should negotiate and agree on something. He also emphasised that the UK government is keen to see Somaliland and Somali have fruitful and serious negotiations to resolve the issue.

Both the Ambassador and the intellectuals highlighted the ongoing challenges on Somaliland in terms of elections and agreed the need to ensure that all stakeholders work together to ensure elections are held as soon as possible. The intellectuals underscored while the ultimate responsibility of the country’s development is on the Somaliland’s government and the citizens, they have also noted the need for the international community to continue providing critical support on social sectors and democratic institutional building.

Finally, the Ambassador thanked the intellectuals for coming to share their constructive views, and also noted his appreciation to Inspire Group for organising such a useful conversation and bringing diverse scholars within a short notice.