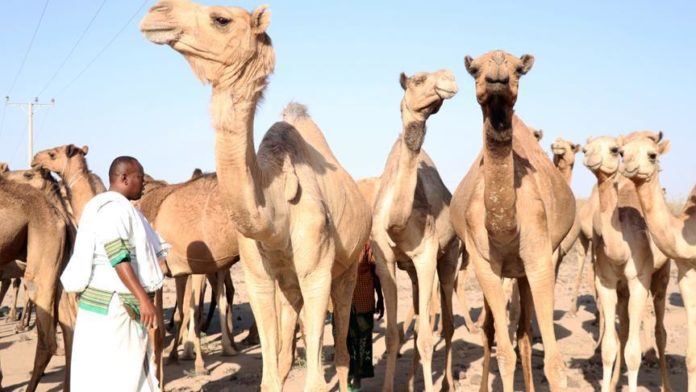 Many people in Ethiopia’s northeastern Afar region know about Turkey and its president, and speak very fondly of how Turkish organizations such as the state-run aid organization TIKA and the Red Crescent are helping them, as there are many Turkish footprints in the region in the forms of wells and other amenities.

But one Afari man, Ali Haider Yasin – a 38-year old who runs his own non-governmental organization from his office in the town of Awash Arba, some 240 kilometers northeast of the capital Addis Ababa – takes this fondness very personally, as he wants to give President Recep Tayyip Erdogan the gift of a camel and its offspring.

Gayreo is the name Yasin gave his camel, meaning “she-camel full of milk.” The camel has two offspring already and is currently again pregnant.

Yasin is waiting for an opportunity to make what he described as “humble” gift to the man he so reveres: Turkish President Erdogan.

Gift as yet undelivered

It has been many years since Yasin prepared the camel as a gift for Erdogan, but he did not know how to do it.

“There are other traditional articles used for milking that I want to give him. The problem is I did not know how I could give my present. I sought you out [Anadolu Agency] and I don’t even know if you can help me with that,” Yasin said.

“The reason why I want to give a camel as a gift is because a camel is something you give to people you so love and admire and respect. I respect and admire President Recep Tayyip Erdogan.

“Notable among his deeds that I so admire is his support for the Muslim world and the solidarity he shows when Israel attacks the Palestinians. And also the donations he give to the Palestinians.

“All in all, I respect the strong sense of solidarity he has with the Muslim world,” he told Anadolu Agency.

Photos of President Erdogan adorn most surfaces inside Yasin’s office, in a villa which he also uses as residence.

“And he is the people’s president and he helps the poor and the weak,” he said, pointing to one of his pictures hanging on the walls.

He said he was amazed by a story he was told when he visited Turkey two years ago after a road accident. The story told how Erdogan responded to a child’s request to visit the home of his parents and how sad he felt seeing how poor the family was.

“And I saw that Turkey managed great changes that came about under his leadership. This is the man that I respect and admire,” he said.

He added: “Sometimes I ask why Allah didn’t make Turkey the place for the Hajj and Umra and the Kabbah [Muslim pilgrimages]. It’s because Islam is said to have originated in the Arab world but seeing the unseemly things the Saudis are doing ….

“Erdogan far excels them in what he does for Islam. That is what made me want to present him with a camel.”

“This may be a minor thing for him, but it gives me happiness to do it. I have my own private business, and I have a sort of NGO which helps orphans, and I support poor society by building schools.”

Yasin founded his NGO, the Dagu Relief and Integrated Development Organization, after his accident which took place around the time of the defeated 2016 coup in Turkey, when he went to Turkey for medical treatment.

“I decided to give him a camel just after the foiled coup. I contacted the embassy and told them about my plans, but they didn’t take me seriously. Somebody proposed that I come to Anadolu Agency’s office [in Addis Ababa] and here I am after searching you out,” he said. “If I had my way I would have established stronger [Ethiopian] relations with Turkey,” he said.

He said, “There’s a lot that Ethiopia should learn from Turkey, especially the Turkey under Erdogan’s rule. I heard and saw about the changes that have been brought about in Turkey.

“I heard that decades ago the Turkish lira was worth less than Ethiopia’s. But now …. Whatever you see in Turkey there are great things. Our city mayors should go visit Turkish cities and establish partnerships.”

“The Rohingya people had suffered under the rulers of Myanmar. But it is Erdogan who spoke about them.

“And Turkish relief societies such as the Turkish Red Crescent have built wells and other amenities in Afar, and for that reason too the people of Afar like Turkey and the Turkish people.”