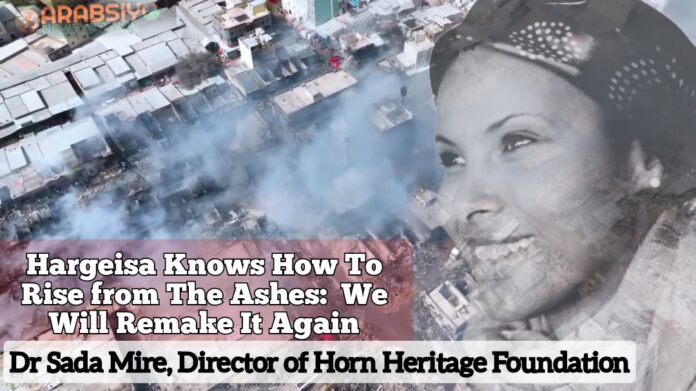 Dr Sada Mire, Director of Horn Heritage Foundation, provides a compelling personal reflection on the Waaheen market, which she has a long history with.

Over the past thirty years, Hargeisa has become a beautiful city thanks to Somaliland’s peace. I am proud to hail from this city and lucky to have a base here in the past 15 years. Ironically, the place where I feel most at home is the Hargeisa market- and ironically, late Friday evening a fire broke out in this very market and devastated the heart of the city. When in 2018 a journalist asked me where my favourite place was in Hargeisa, I replied the Waaheen market. If I who mostly resides outside can feel so connected to Waaheen, I can only imagine how those who made it what it was feel like now.

When it happened, I did not sleep the whole night, waiting to hear from friends there and fearing that the fire would reach the nearby gas station. It did not thanks to the Somaliland Fire Service and selfless volunteers. A number of people were injured. Thankfully though we also learned no deaths were reported. It was quickly clear however that thousands lost their assets, businesses and jobs. Hundreds of millions of dollars disappeared in a few hours. I spent the early hours of Saturday contacting local and international officials and agencies to alert and urge them to provide support.

Images from the fire triggered the trauma of the war time that many of us who witnessed it still harbour. For me, the memories of entering Hargeisa in 1991 came back. With disbelief I was looking at the same kind of Armageddon. The devastation is unreal: the images of ash covered metal roof sheets fallen on top of each other. Clouds and air foggy with smoke like in an old dreary painting.

In 1991, as a 14-year-old I re-entered Hargeisa on top of a lorry with my siblings, mother and grandmother. We fled Mogadishu and had spent months in a makeshift refugee camp in Ethiopia-the real refugee camps were all full. Nothing was whole: no human being or a living thing. It felt as if everyone had something missing, if not a limp, a mental presence. Hargeisa was bombed to the ground by the Somali dictatorship in 1988. A shadowy ghost of a town welcomed us. The lorry driver tried to keep the wheels on pre-travelled tracks as the whole city was a minefield. We stared at trees that had more bullet holes than branches or leaves. We saw men with guns littered on the road, at a close look with the cheeks full of khat. There was constant casual shooting. We kept stopping at random heaps of rubbles, for which people got off at, identifying them as their former homes. We pulled up at another rubble, where my grandparents’ home used to be, apparently where I once lived as a baby. We were one of the first families to return.

The next few days we tried to find food, stepping only where some else had stepped on. My memory of the market at the time was that it was a dangerous place. Everyone was there, including machete wielding madmen, who lived under the bridge at night. We could see Hargeisa was not safe but after a few months it took another full-blown war to get our family out again.
As I wrote about in The Guardian newspaper a few years ago, Hargeisa knows how to rise from the ashes. However, this market has become the backbone of Somaliland’s economy. It also came to mean so much to me over the years. Only a few weeks ago, I was buying textile here, marvelling at the colours. I remember the jokes that I exchanged with the sellers. Sometimes, they would see my outfit that gave away my diaspora identity and say “Hello” instead of the local greetings. I would insist on responding with the broadest Hargeisa dialect and they would be a bit puzzled. Then I would tell them about how my twin-sister and I were street vendors selling tomatoes and anions in bowls and how the shop owners would chase us away from the front of their shops. Both my grandmothers too sold sorghum in this market for decades before I was born. Talking about this, I would be emotional sometimes and they would be heart-warmed that what they seem to take for granted, I did not. Often the younger guys were too young to have experienced the war and they would be so surprised to meet someone who seemed to come from Europe but actually knew this market from a time when you could only put your foot where someone else had, otherwise you risked stepping on a mine. All these little conversations would end with a gratitude for what we have and achieved as a people. I always buy my food, clothes, even jewellery and gifts for my family at this market. You can find almost anything here. Everything for the home, electronics, utensils, stationary, toys and some things that are locally made: beds, furniture, mattresses and more. Most furniture in my office in Hargeisa are pieces I commissioned from the market carpenters: shelves, chairs and tables. Now this kind of ingenuity burned in the blaze. On the dawn of this blessed month of Ramadan, Somaliland is faced with the biggest financial challenge since 1991.

One very special place has burned down too: a friend’s atelier. Like me she fled Mogadishu as a teenager with her mother and stayed on continuing the family craft of tailoring. Over a decade, she and her tailor colleagues have made my dresses. I always bought the material from the stalls right in front of her atelier and my new dresses were without a fail ready within days. My dresses were made of shiid (soft cotton), used for local diric/baati dresses. Last time I brought her material was August last year and I never managed to go back and check if she had finished the dresses or not. The day after the fire I called to see if she was Ok but her daughter texted back saying “Habo, hooyo is napping”. I do not remember my tailor friend ever being away from her atelier, let alone having time to nap. I cannot even begin to imagine what it must be like for the effected people. I cried for my friend and for all the people who lost businesses, jobs and the street vendors. They all built so much with so little support from the outside world.

The numerous documentaries I have filmed over the years with the likes of National Geographic, Futura Channel, CNN, and CGTN on the archaeology of Somaliland have also always featured this market too. I always felt without this market no story was complete. In one of the documentaries, my tailor friend told her own success story, from being a refugee to a thriving entrepreneur. I know though that it will not be long till the locals will again show off their market and its new success stories. Already, the street vendors are lining up their goods again. Again, this reminds me of how things started in 1991.

Disasters have a way of bringing people together and that is heart-warming. Somalis all over and other nations have sent messages of support to Somaliland. Assistance is being organised locally as well as with the help of neighbouring countries and with the international community. The Hargeisa of today is increasingly international, hosting not only a large group of international businesses, some owned by foreigners, but also welcoming refugees from Ethiopia, Syria and Yemen, who have made the city their home. I hope this exhibition by Horn Heritage and my personal reflection contributes to capturing a now lost bit of history. To showcase the creativity of the Waaheen tailors, Horn Heritage team put together some photos of my Waahen made outfits over the years, from 2010 to 2021. May more discover the delights of our local creativity! Please support fundraising efforts to help those in indeed in Hargeisa. Blessings and Ramadan Kariim.