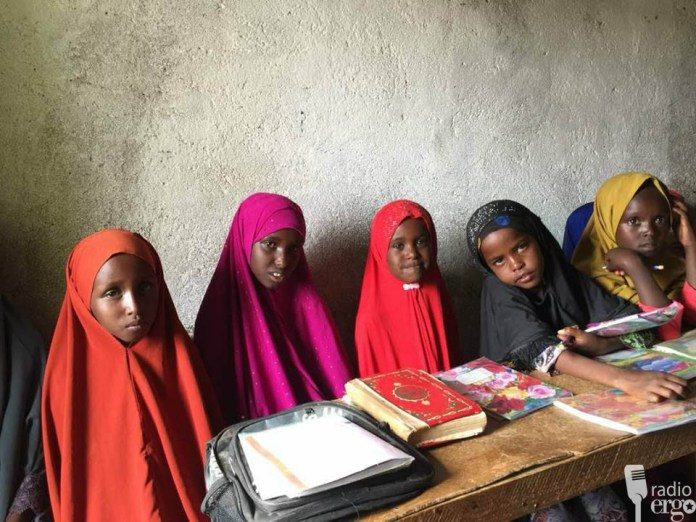 An initiative by university graduates and students is enabling nomadic Somali children whose education was cut short by the punishing drought to catch up on their studies.

The group of 150 youth have set up classes for children of destitute pastoralist families, displaced by drought and resettled in Hingalol, Elbuh and Damala-Hagare villages in Sanag region.

So far, 120 children have enrolled for the programme and are resuming learning.

Abdirahman Jama, the chairperson of the group, told Radio Ergo they opened three schools in the villages to give free education to the children.

The schools each have two rooms and enroll children aged between six and 11 for classes in reading, writing, and mathematics.

“The idea to set up these schools came to mind after we saw children from these villages whose families are poor staying at home with no access to education,” Abdirahman said. “We have hired teachers from the areas to teach 120 children,among them 75 girls.”

Abdirahman said six teachers have been hired on a monthly salary of $100 each.

“Our monthly budget is between $4,000 and $4,500 based on contributions. These cater for the rent, salaries for the teachers, as well as learning materials such as chalk, books and pens,” he said.

Mohamud Ahmed, 11, whose family was displaced by the drought is among the pupils at one of the schools.

“When I grow up, I want to be an engineer. I am learning mathematics and how to write the Somali language. I also learn the Quran,” he said.

Aisha AididGuleid, a mother of three, fled a rural area on the outskirts of Hingalol town after the drought wiped out their livestock.After settling in Hingalol, Aisha started a small business selling vegetables to support her family.

She told Radio Ergo that she is relieved that her three children are being supported to go to school.

“We appreciate the opportunities given to children. To us, it is something big because it gave our children who used to stay at home a chance to access free education. I would not be able to pay their fees,” Aisha said.

Asha Owke Farah, another mother in Hingalol, welcomed the free schools.  She had dropped the idea of schooling her four children due to financial problems.

Asha told Radio Ergo going to school had boosted the morale of her children.

“I took my children, two boys and two girls, to the school. My children never attended school before this one because I was financially unstable but now they have a chance to get an education,” she said.