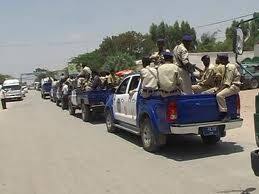 Somaliland security forces launched a major stop & search operations of vehicles in the capital Hargeisa and Burao for the past three nights.

The objective behind the operation that police are conducting and its outcome are still unknown as far as security is concerned.

Togder provincial police chief, Ali Mohamed Farah, who spoke to the press yesterday while in Burao, confirmed that prior to the launching of the police operation, the police officer nabbed five suspects who were accused of carrying out operations that pose threat to the national security.

He said that it is one of the operations that police conduct on regular basis in a bid to beef up security.

He further added that there is nothing that he could disclose which led to the launch of the operation but further said that it was conducted in order to heighten security.

He expressed thanks to locals in Burao who cooperated with police officers patrolling the mayor streets of the capital and complied with their orders.

He said: ” We had not arrested anyone last night or the previous night but while I was on a visit to Hargeisa. Individuals were nabbed. The investigation is underway. At least five suspects are under arrest. It is possible that they might be Somaliland nationals or foreigners. I cannot confirm that they are from Southern Somalia. We had not so far seized explosive items.”

The police force in Somaliland did not speak out the operation aimed at beefing up the security.

Unconfirmed news indicate that at least ten people were also arrested in Hargeisa but we could not confirm.