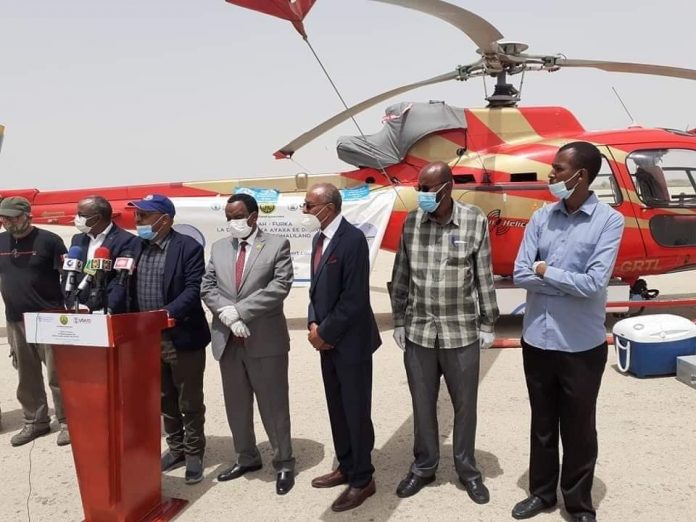 The helicopter crew of 5 including pilots and assistant pilots have been warmly welcomed upon arrival and safe landing of the two helicopters in Hargeisa.

For the last few weeks Somaliland was struggling with indoors newly hatched Desert Locust that attacked high number of farming lands and animal grazing areas as well. The DL team from the Ministry of Agricultural Development (MoAD) supported by FAO along with partners was engaged in carrying out ground control against DL that even invaded the suburbs of main towns in Somaliland including Hargeisa city. Additionally FAO handed over 6 new pick up land cruisers mounted with vehicle-mount Sprayers and large quantities of bio pesticides

In close coordination with Somaliland government Institutions and FAO Office, the two helicopters are to carry out area spray operation to control DL with the full support of technical teams from MoAD and FAO to avoid further spreading and damaging more agriculture and pasture which will last for the coming weeks.

The FAO Head of Hargeisa Office highlighted that the progress made in the field of of the desert locust emergency is a reflection of the joint commitments and improved working relations of FAO & MoAD. After much appreciation and gratefulness to FAO’s efforts in collaborating with the government priorities in Agriculture sector including the current desert locust interventions with the support of USAID, the Minister emphasized the high importance of the desert locust interventions to avoid loss of pasture and agriculture products.

The Minister informed the public to be aware about locations to be sprayed by these two helicopters for their safety and take necessary precautions which will be further disseminated within the coming days. He kindly requested all district and regional administration councils with their security teams and airport management to collaborate the successful implementation of the areal control measures of the desert locust.