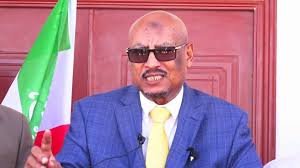 Faisal Ali Warabe, the Chair of UCID party has intervened in the case of embattled Djibouti pilot, Fuad Yusuf Ali.

He called on president Ismail Omar Guelleh to release the detained pilot and improve the conditions of prisons.

Faisal said: ” We say to him fear God, release Fuad, the pilot and improve the conditions of prison. Another prison had in the recent past became infamous and tortured Ogadens. This should not be called Jail Issa.”

Fuad Yusuf Ali, a pilot in the Djibouti Air Force was detained three months ago on charges of treason and an attempt to defect with a fighter jet to Eritrea.

A video he recorded in his prison cell went viral and sparked large demonstrations in Djibouti.

Faisal Ali Warabe further called on Guelleh just to be a ruler and to disabuse himself the notion of absolute rule.

He has been in the helm since 1999 once his late uncle personally appointed him.

His government has repeatedly come under fire for terrible record on gross human rights violations including torture and arbitrary detention of opposition supporters.