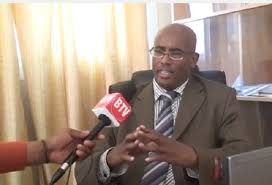 The Honorable Ex-Chairman Nassir Ali Shire, Ex-Chairperson of Somaliland’s House of Representatives Public Accounts Sub-Committee (PAC), correcting obliquely interpreted references to the world-class remittance company based on a report he made public early August, classified Dahabshiil as above reproach.

The Honorable Member of Parliament, following up on a report he submitted to the Lower house of Somaliland’s bicameral Parliament, spoke to Bedri Kossar, a senior correspondent of ERYAL TV, today, about a misinterpretation made to his reference of ‘Dahabshiil’ in his report.

The MP clarified in no uncertain terms that neither he nor any notation in his report ever intended to link the renowned, much-revered company to any malfeasance.

He said the thread of possible misappropriation of public funds they were following only referred to the company as the source of a payment made towards the construction of Burao Central Prison.

“Our investigation had nothing to do with Dahabshiil as misinterpreted. We were only looking at funds that went to the government-initiated construction of the Burao Central Prison,” he said.

As part of a package deal the former government entered with Dahabshiil on a deed of sale to a piece of land, which, by itself, was perfectly legal, the company was charged to pay US$ 577000 to Al Baraka Construction Company.

PAC, not knowing that the money went directly to the company accused the then Minister of Public Works of short-changing the deal, saying the Minister gave the company only US$540000 – which was later challenged and fully repudiated.

PAC, also, unclearly made a reference to a discount made in the sale deal. Again, it was established that the amount referred to by the report was, in fact, an amount the government earmarked for the relocation of residents and squatters living on the government plot, as most of them were officers and NCOs of the Somaliland police force.

“I never directly accused the company of receiving a discount, as it did not. The US$350 000 mentioned, which was misconstrued as a discount, in fact, went towards the relocation of families living on that particular plot of land,” he said.

The MP went on to disclose that he, in person, looked over the areas the relocated families moved to where, presently, they were living in houses they owned where, previously, they were, literally, mere squatters on borrowed spaces.

Following the controversial report the PAC Chairman to the HoR floor, it came to light that Dahabshiil actually augmented the government-earmarked amount with US$34000 more as part of the company’s much-commended corporate social responsibility program.

“Dahabshiil is one company that earned the undivided respect and reverence of all of Somaliland,” MP Nassir Ali Shire pointed out, thus emphatically clarifying his personal and official position of the company.

The Report was also, later faulted in other press conferences by MP HAmmud, presently the Acting PAC chairperson and the Somaliland Auditor General.

Dahabshiil has become a byname of trust, efficiency, and thoughtfulness to customers and at locations, it operated in all over the world.

The Company has been internationally certified as a compliant entity which fully implements not only all major financial regulations but those peculiar to each locality and country which it serves.