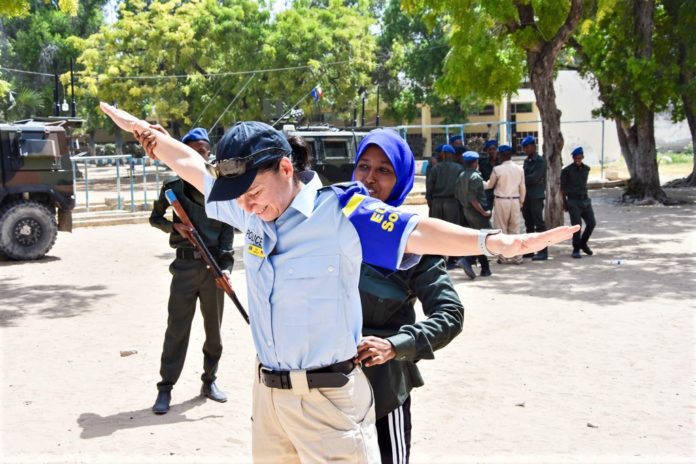 Police are standing beside soldiers in a sand-filled training ground: they are gathered around a stationary car, going through the procedures needed to search it and secure the environment around it. This is the main police academy in Mogadishu and Somali police officers are training to become a specialised robust police unit called “Darwish” who can take over from military forces in liberated areas in Somalia, and pave the way for civilian police to carry out their work.

The course is based on a Darwish Basic Training Curricula modelled on courses delivered by Italy’s Carabinieri police, that comprises general policing and rule of law theory as well as practical law enforcement and tactical scenario training.

The Darwish is seen as another step forward in supporting a military to police transition in Somalia under a plan agreed by the Government of Somalia and the international community in 2018.

This way of working – EU civilian and military personnel working together with international partners in a complementary way – was one of the main messages from Mr. Vincenzo Coppola, Civilian Operations Commander for Common Security and Defense Policy (CSDP) Missions to EUCAP staff and to counterparts, during his visit to Mogadishu in January.

“We have to do more than coordinate; we have to work in complementarity. It means that we work together in such a way that where we may need to stop, someone else can add to that work, [complement it].” In this way, we can reach common goals.

During his visit the Commander met the Prime Minister of Somalia, Hassan Ali Khaire and the Somali Police Commissioner, Abdi Hassan Mohamed, and visited the police academy to see the ongoing Darwish) training. He was welcomed to Mogadishu by EU Ambassador Nicholas Berlanga and discussed deepened partnerships with U.N. counterparts, and with U.S. Ambassador Donald Yamamoto and Italian Ambassador Alberto Vecchi.

During his meetings with EUCAP Head of Mission, Chris Reynolds, and staff from EUCAP operations, Chief of Staff office, and security and mission support departments, Mr. Coppola commended the mission on its achievements. These include the Maritime Criminal Justice Chain Exercise (MACRILEX); a  training facility for a Maritime Police Unit; the launch of the Darwish training; support to the police training curriculum together with international counterparts, as well as gender equality and human rights work. The continuing successful coast guard training in Hargeisa and Berbera in Somaliland, and assistance given to the development of the Somaliland Coast Guard Law were also highlighted.

Concluding his three-day visit, the Commander highlighted the importance of supporting Somali led and owned processes in building rule of law and security in Somalia. “Local ownership is important. We can advise, support, train, provide capacity assistance, but it is Somalis that must lead and drive the process, and determine the security policies of the country,” he said. 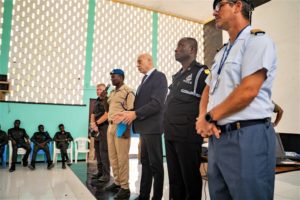 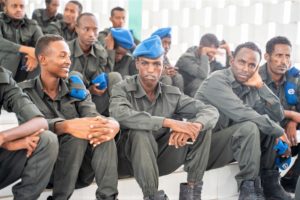 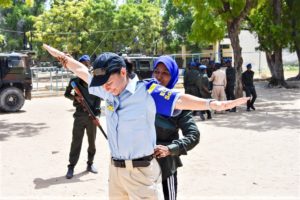