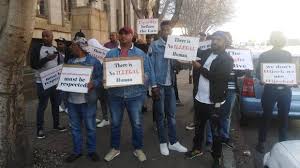 A group of Ethiopian nationals on Monday picketed outside the Johannesburg Magistrate’s Court, where seven police officers are due to appear for allegedly soliciting bribes and trying to resale counterfeit goods confiscated during last week’s raids.

About 100 Ethiopians gathered outside the court, where they complained about what they said was the South African government’s decision to detain more than 500 foreign nationals during a counterfeit goods raid on Wednesday.

Those detained were taken in for processing at the Johannesburg Central Police Station. Their immigration status and possible criminal records were to be checked, police said.

However, leader of the Ethiopian community in Johannesburg, Tadesse Yemane, on Monday said: “They are assassinating or characters by saying we are illegal immigrants and participate in selling illegal goods. We are to make our voices heard,”

Speaking outside the court, chairperson of the African Diaspora, Vusumuzi Sibanda, said many of the foreign nationals were mistreated and irrespective of them being legal immigrants. He said the organisation demands that detained persons to be treated “like people”.

Sibanda claimed the police forced detained foreign nationals to sign false statements declaring that they were illegally in South Africa.