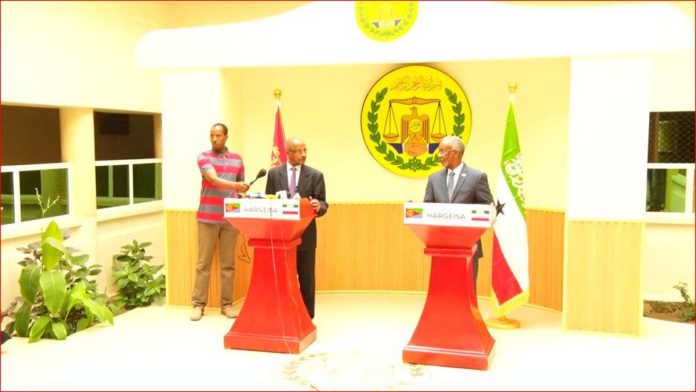 The visit is aimed at the ongoing constructive engagement towards regional security and prosperity of the Horn of Africa after Djibouti President Ismaïl Omar Guelleh arrived on Saturday in Mogadishu, Somalia to boost the cooperation relations between the two brotherly and friendly countries.

Yesterday, the Djibouti leader inaugurated the brand new premises of the Djibouti embassy in Mogadishu, the capital of Somalia.

Somaliland, officially the Republic of Somaliland is a self-declared state, internationally considered to be an autonomous region of Somalia.

Somaliland has built a more democratic mode of governance from the bottom up, with virtually no foreign assistance to create the most democratic political system in the Horn of Africa with viable electoral and legislative systems as well as a robust private sector-dominated economy, unlike neighbouring authoritarian governments including from the country where today’s delegate came from, Eritrea.