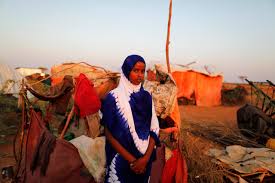 More than one million children in Somalia under the age of five face acute malnutrition unless the international community drastically steps up funding for life-saving interventions, Save the Children warns.

According to the latest figures [1] the current food crisis in Somalia has driven acute malnutrition to serious and critical levels in most parts of the country, exposing children to life-threatening risks of malnutrition and other diseases.

Save the Children says funding shortfalls, conflict and instability are hindering aid reaching the most vulnerable children and families.

“Our worst fears are being confirmed with a million children once again set to suffer through the degrading, miserable impacts of drought. Families have simply not had enough time to recover from the prolonged drought of 2017, where their herds died en masse and thousands of people were forced to move to camps to access food and water.”

“What really concerns us is frequency of these droughts. Pastoralist communities – families who depend on livestock for their income – need on average two seasons of good rains to recover from one poor season. The frequency and severity of drought in Somalia is unprecedented, and now even the hardiest of families are saying they give up in the face of this climate crisis.”

“We need more support, now, to scale up humanitarian interventions and allow people to survive long enough to be able to adapt for the future,” said Mohamed, adding that the Drought Impact Response Plan – currently less than half-funded – must be fully funded to avoid a humanitarian catastrophe similar to the droughts of 2011 and 2017.

In total, at least 2.1 million people face crisis-level food shortages or worse. More broadly, 6.3 million people – nearly half the country’s population – will be food insecure between from October, with Sanaag, the Bari regions of Puntland, Mudug, Galmudug, Hiran Bay and Bakol region in the Southern States expected to be worst hit. This follows a lack of rains.

Seven out of the last eight rainy seasons since 2015 have been poor or failed across the Horn of Africa. Families are still reeling from a massive drought in 2016-2017- one of the worst on record – which affected 19.5 million people across East Africa.

Juwayria, 43, came to a stabilisation centre in July with her grandson Ali*, 15 months, who was severely underweight. Juwayria’s family lost most of its livestock in recent droughts, and is now braced for a repeat of 2017.

“The problem [drought] has been reoccurring continuously and there was no emergency assistance for us. We’ve lost livestock. I used to be a livestock keeper but now I have very few left and that’s what we survive on. I do not have any resources other than a few goats.”

Save the Children is already working to help affected communities in Somalia to cope with the immediate humanitarian effects of drought. We are providing emergency water supplies, treating children who are malnourished, supporting education systems so that children do not miss vital learning while displaced by drought, running health facilities, and providing cash and livelihood support to the most vulnerable.

Khadra, 33, looks after 20 children in Puntland, Somalia. She was forced to move to the city to look for work when drought decimated her family’s herds. Now, thanks to $600 investment capital provided by Save the Children, Khadra has opened a tea shop and is planning to use her income to put her children through school.

“Before the drought we had a good number of goats – more than 100. After the drought we didn’t have enough to feed the family. I love the life I am now living. The reason being all my children and relatives are in my household and I don’t have to worry about the livestock. Now I can give them a bright future,” she said.

Save the Children has worked in Somalia since 1951, and is a national and international leader in humanitarian and development programming in health, nutrition, education, child protection and child rights governance. In 2018, Save the Children reached 2.5 million people in Somalia, of which 55% were children.

*Names have been changed to protect identities.