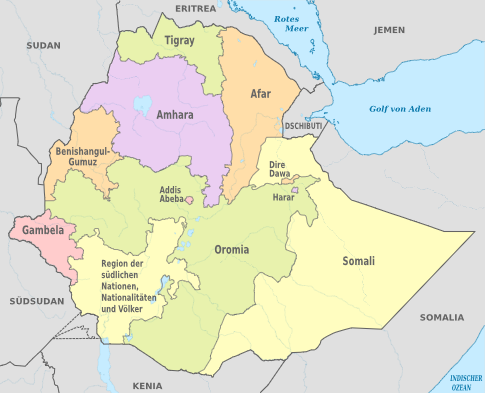 “If the violence intensifies in Ethiopia, a situation reminiscent of the Lebanese Civil War could emerge and the 2018 Eritrea-Ethiopia peace agreement is likely to become the first casualty.”

15 July 2019 – Recent political reforms by Abiy Ahmed, Ethiopia’s prime minister, have revived ethnic tensions within the country, resulting in violence that could spiral into civil war. This could have grave repercussions not just for Ethiopia’s neighbours, but for Europe, East Africa and the Arab Gulf states as well.

Ahmed campaigned on a platform of uniting Ethiopians and reforms, in an attempt to loosen the autocratic grip on power by the ruling Ethiopian People’s Revolutionary Democratic Front (EPRDF) coalition.

Ahmed angered the Tigrayan parties by significantly reducing the overweening dominance of Tigrayans in Ethiopia’s security and intelligence services. He has also sought to create space for opposition parties by releasing political prisoners and inviting exiled opposition leaders back to Ethiopia. For example, in June last year, a bomb directed at a rally where Ahmed was speaking was blamed on disgruntled elements of the ethnic Tigrayan sector of the EPRDF.

Last month, Three senior regional political figures, all of them ethnic Amharas, were assassinated by a squad allegedly led by an Amhara general who had been released from jail in Ahmed’s reform sweep. The general was said to have been raising an Amhara militia to attack other ethnic groups in the Amhara region, in direct defiance of both the federal and regional governments.

Ethiopia is already on the brink of a humanitarian crisis, with 2.9 million people internally displaced because of ethnic violence and 8 million people requiring emergency food assistance. If the violence intensifies and Ahmed’s government is unable to control it, a situation reminiscent of the Lebanese Civil War could emerge, with multiple groups taking up arms under various pretexts.

This will naturally have serious geopolitical ramifications. As a country of 100 million people close to the Arabian Peninsula and East Africa and straddling migrant routes toward Europe, a civil war-like conflict in Ethiopia is likely to send huge numbers of refugees heading toward Europe, Kenya, Saudi Arabia and Yemen.

Ethiopia’s ethnic groups, each with multiple militias, transcend the country’s borders; inter-ethnic violence will also cut across national frontiers and inflame similar — but so far dormant — ethnic tensions in Ethiopia’s neighbours. A security vacuum in the restive Somali region of Ethiopia, coupled with the likely withdrawal of Ethiopian peacekeeping troops from Somalia itself, will strengthen the Al-Shabaab terrorist group, which might then launch terrorist attacks in Uganda, Kenya and within Ethiopia itself. The fragile peace achieved recently in South Sudan and held together by a joint Ethiopian-Sudanese effort could unravel as a distracted Addis Ababa focuses on domestic matters. Sudan’s incipient power-sharing deal between its military and civilian opposition, which Ahmed helped facilitate last month, could also come apart in the absence of an external interlocutor.

The 2018 Eritrea-Ethiopia peace agreement is likely to become the first casualty of chaos in Ethiopia. Isaias Afwerki, Eritrea’s autocratic president, has been slow to implement Eritrea’s end of the deal and would probably regard a democratizing Ethiopia as a threat to his own iron grip on power. Eritrea has in the past supported Ethiopian armed opposition groups and could well restore those links with its erstwhile proxies to foment chaos in Ethiopia. This will also threaten Saudi and Emirati plans for the region; both states have invested considerable effort in facilitating a rapprochement between the countries in order to secure their significant investments in the region’s agricultural and infrastructure sectors.

Given these serious threats, it is incumbent upon international powers that carry weight among Ethiopia’s political players, such as the EU, China, Saudi Arabia and the UAE, to facilitate an internal political dialogue between the various stakeholders in Ethiopia’s polity.

The ultimate goal should be to enable Ahmed’s government to remake Ethiopia’s federal model in a manner that is acceptable to all of the country’s ethnic groups, as well as to create an atmosphere conducive to free and fair national elections in 2020. Germany has already pledged to finance the demobilization of Ethiopia’s armed opposition groups, while the UAE has promised $3 billion in aid and investments. The rest of the international community must step up its efforts as well before it is too late.