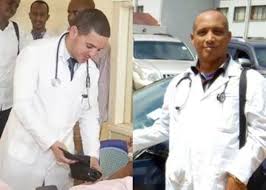 At a press conference in Havana, Portal said Cuba was doing everything it could to recover the kidnap victims and has so far received no ransom demands from the kidnappers, as some media sources had reported.

Efforts to secure the release of surgeon Landy Rodriguez and internist Assel Herrera represent “a complex process that requires time and discretion to succeed,” he said.

“Cuba’s government will not cease its efforts for their release,” he added.

Cuban President Miguel Diaz-Canel recently spoke by phone with his counterparts in Kenya, Uhuru Kenyatta, and Somalia, Abdullahi Mohamed, to coordinate efforts to recover the doctors, who appear to have been kidnapped by extremist group al-Shabaab, which operates in the border area.