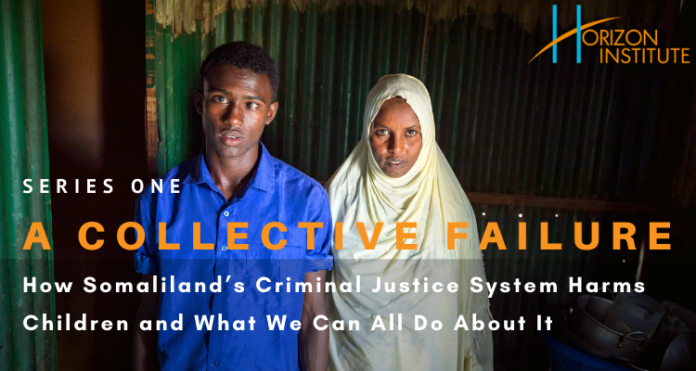 “My son was 14 years old [when he was arrested]. I was feeling a lot of panic. I was stranded. I didn’t know where to go or who to talk to. That was a disheartening moment for me. I couldn’t even sleep at night because I was worried about my son.”

– Ikran, mother of Mohamed who was arrested and charged with a crime before he was 15 years old

In Somaliland, children must be 15 years old before the criminal justice system can punish them. If they are 14 years or younger, they are not old enough, in the eyes of the law, to be arrested, charged, prosecuted and sentenced to prison time. In legal terms, this age limit is known as criminal capacity and it is intended to protect children as they mature.

Without reliable proof of age, like birth certificates which are not common in Somaliland, children who are 14 and younger are routinely arrested, charged with crimes, prosecuted and imprisoned.

In the report published today, A Collective Failure: Criminally Punishing Children Considered Too Young to Fully Understand Right from Wrong, the story of Mohamed is told in detail to illustrate what happens to children, and their families, when they get caught up in the criminal justice system at a tender age. The report covers the cases of countless other children who, like Mohamed, have seen far too much of police stations, courts and prisons before they are even 15.

Using their experiences, Horizon Institute is aiming to explain to the public at large what the law is in Somaliland, and how and why the legal protections are not always being applied in practice by police, prosecutors and judges. Above all else, Horizon is seeking to show the public that every adult has a responsibility to make sure the law is respected so children, who society considered too young for criminal sanctions, are safeguarded.

This report is the first of a four-part series dedicated to children accused of crimes in Somaliland. This series attempts to make accessible to everyone information about the injustices that children who are arrested, detained and prosecuted experience. Calling on all adults “to become a part of the solution”, the series also puts forward feasible suggestions about how we can all play a part in encouraging adherence to the existing laws and to create a more just system in practice.

A Collective Failure will have five topics featured in the series: (1) Why prosecuting children 14 years old and younger is unlawful; (2) How holding children in police stations before and during trial punishes them before they are even convicted; (3) How children are getting harsh sentences for relatively minor offences; (4) How the criminal justice system is functioning as a replacement for family responsibilities, community interventions and solidarity and government educational and social services and (5) What those working in the criminal justice system can do now, with little to no financial resources, to make sure each child is treated like a child The law promises to defend and respect all of us, including children who have committed crimes. It is our obligation to make sure the law works for everyone.

To read the report and learn how you can become part of the solution and help, click here