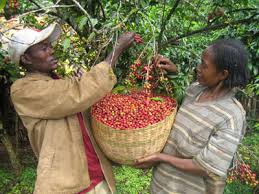 CHIRA, Ethiopia, Sept 6  – Every month Ethiopian coffee farmer Zelalem Tadesse makes the long and arduous journey to court to fight for the return of the land he inherited from his father.

For years the 46-year-old father of three has cultivated the small patch of land deep in Ethiopia’s southwestern forests that he says a nearby commercial coffee farm took from him.

“When I go to get my land back it’s very expensive,” he said of his trips to the nearby town of Jimma and, more recently, the capital Addis Ababa. “But my life totally depends on this land.”

Zelalem has no formal title deeds to the land and although Ethiopia recognises some customary rights to forest access, in practice these are often ignored by local authorities and investors.

He and his neighbours in Chira, a small highland town dependent on coffee production, complain their livelihoods are being squeezed by commercial investors in the region’s ancient forests.

Anger over land expropriations and unfair compensation drove protests across this region and other parts of Ethiopia from late 2014, leading to the imposition of a state of emergency and eventually a new prime minister, Abiy Ahmed, in April.

Zelalem’s friend Tilahun Mamo told the Thomson Reuters Foundation he too was taking a local coffee investor to court for unfair land expropriation, waving a letter he had delivered to the local government early this year.

“(The investor) took my land in 2011,” he said. “It’s been a problem for seven years now. I asked for compensation, but they laughed at me. There’s been no compensation at all.”

“They promised us employment, road access, electricity and a health centre,” he added. “But none of it happened.”

In Ethiopia all lands including forests are formally owned by the state, making dispossession easier.

The complaints of farmers like Zelalem and Tilahun are echoed across this part of the country, where many depend on coffee forests and where competition for scarce land is often intense.

Ethiopia is Africa’s largest coffee producer and the bean contributes to the livelihoods of more than a quarter of the country’s about 100 million people.

The southwestern forests – thought to be coffee’s birthplace and the centre of its genetic diversity – have long been a frontier for agriculture expansion, in the form of either large-scale clearances or piecemeal encroachment by smallholders.

Over the past four decades, one-third of the region’s forest cover is estimated to have been lost this way.

One coffee plantation in the region, owned by a major Saudi Arabian investor, is the world’s largest and covers some 22,000 hectares.

In the district of Gera around Chira, commercial coffee farms are smaller, but their impact is widely felt.

A recent study by Tola Gemechu Ango of Stockholm University found more than 1,500 hectares of forest in Gera district alone was transferred to mostly Ethiopian private companies in the late 1990s and 2000s.

By 2013 one had failed to export coffee, while two other companies had closed or were inactive. Only 13 farmers had received compensation for lost land.

“Forest land is more vulnerable than farmland, at least in this landscape,” said Tola. “ feel more insecure because they think the government can take over the forest at any time, with little compensation.”

Some investment in land is speculative – district leader Abdulaziz Muhammed said not all the commercial investors that acquired land from local authorities were cultivating it.

A manager at Trakon, a farm near Chira, denied compensation had been inadequate.

“We gave them compensation and we are not preventing them from using their land,” he said on condition of anonymity. “The farmers didn’t complain when construction first started. It was only later that they started demanding compensation.”

Earlier this year protests broke out in Chira and other towns in the region, where angry locals targeted commercial coffee farms. Similar protests took place in 2017.

Zelalem’s brother Tsadiku Tadesse said he had been jailed eight times for his part in protesting against coffee investors in the district, where the field office of one company, Jireen Jifaar Jimmaa (JJJ), was burnt down earlier this year.

“We see the company as our enemy,” said Dejene Diribi, a local who was arrested with 36 others for his part in the protest.

“My family lost one hectare of land when the investor demarcated its boundaries without asking the local farmers. It has brought us no benefits.”

Not everyone in Gera district is hostile to investors.

“Especially Abana (coffee plantation) is very helpful for the local farmers,” said Dagnachew Fiseha, who arrived in the district six years ago.

“They’ve brought electricity and they come with free healthcare once a year.”

Experts today advocate alternative approaches such as participatory forest management, which gives associations of local farmers the right to continue making a living out of the forest while helping to stem deforestation.

“But for a poor country like Ethiopia there is not much alternative to using our natural resources. What we need is responsible investment.” ($1 = 27.4849 birr).