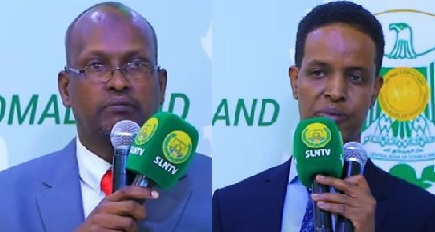 The new Governor of the Central Bank Eng. Ali Abdillahi Dahir has pledged that the exchange rate of the Somaliland Shilling will remain unchanged and that will pursue to raise the standard of the Bank.

He gave the pledge as he was taking over the leadership of the institution. Also the newly appointed director general of the facility was present at the function on Thursday in which the duo were installed at the helm.

Governor Eng Ali commended and expressed his gratitude to the President of the Republic of Somaliland for the significant progress Central Bank has achieved also thanked line ministries who worked to that end.

He promised the Somaliland community and the country’s economic institutions hence said, “Speaking on behalf the Board of Directors of the Bank, that the exchange rate of the Somaliland Shilling will remain unchanged and that we will continue to raise the standard of the Bank.”

While talking on the co-operation Central Bank will have with private financial institutions, Eng Ali said they are ready to strengthen and consult with each other.

“The central bank is the mother of all banks. Though our interest vary, the national interest unites us, and we will maintain unification of all interests” he observed.

Governor Eng Ali first thanked Central Bank prior administrations since its opening in 1994, and in particular the latest one.

Private Banks and financial institutions, such as money changers, have promised to work closely with the new Central Bank leaders.

On the other hand, Director General of the Central Bank, Mr. Mukhtar Abdi Quule thanked the President of the Republic of Somaliland, Mr. Muse Bihi Abdi, for his appointment and said that it is a testament to the President’s commitment to the youth, as he have become the youngest man to hold the post of DG since the establishment of the Bank in 1994.

Mr Mukhtar speaking at function on Thursday, 15th September, 2021, has recalled his experience on financial systems, and  said that up on completion at Amoud University in Commerce and received his honorary grade at his patch. In terms of experience, he said he was amongst the first youth graduates employed to take part in the PFM government program, formerly known as the Somali Institutional Development Project (SID) particularly in the Office of the Accountant General.

“During my term of service in the Accountant General Office, I have participated the work in the preparing the laws governing the Public Financial System, and that experience allows me to be capable to perform this new role as Nation’s Central Bank” he said.

Speaking on the Bank’s activities and responsibilities, DG Mukhtar elaborated the first thing under his responsibility is ensuring bank staff follow banking procedures and instill diligence as they have been entrusted and chosen to be guardian of national treasury.

DG Mukhtar recounted the difficult circumstances his schooling days encountered   and said that he had enrolled to Sheikh Ali Ibraahim (Biyo-dhacay sare) school thirty years ago, when populace was returning back to the country, everywhere was in ruins.

He said that on those days stones were their chairs, and rarely, did them get cans, and as classroom were in the open air, they sheltered under sacks or nowhere.

Given his background and age, he quipped, was the epitome of Somaliland reconstructing itself from the ashes of ruins, the need for transparency, accountability and above all, importance of being diligent.

On the other hand, The Governor of the Central Bank of Somaliland, Ali Abdillahi Dahir and the Director General Mukhtar Abdi Qule had an introductory meeting today 19th September, with the Directors of Departments, and Managers of Branches in the Capital.