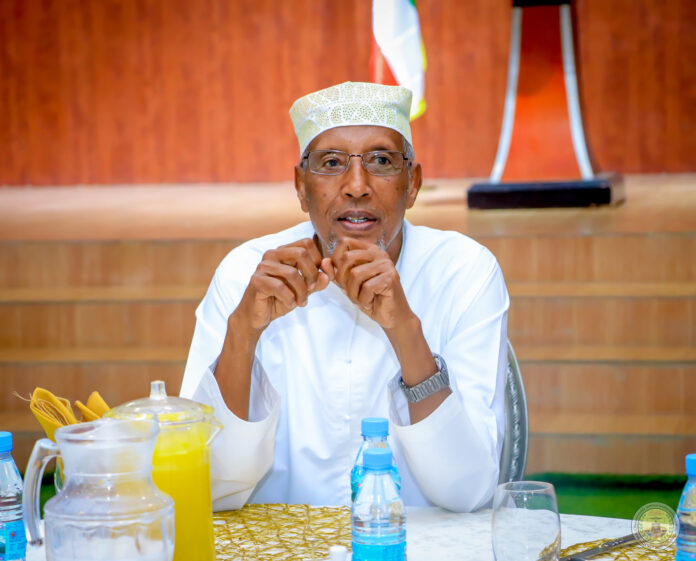 Flanked by the Vice President H.E. Abdirahman Abdilahi Ismail (Sayli’i), members of the cabinet, business people and officials from various companies in the country, the Waheen Market Emergency and Relief Committee recently constituted by the president, religious leaders, and several politicians and other community members.

The chairman of the Somaliland Chamber of Commerce Mr. Jamal Aideed Ibrahim while addressing the gathering thanked the President for spearheading a nationwide Somaliland-led initiative to provide relief to those affected by the fire and commended the business community at all levels for responding to the meeting and contributing to the fundraiser.

Dr. Farhan Liban, chairman of the Waheen market support sub-committee and Dr. Ahmed Aden Buuh, who spoke on behalf of the country’s leading clerics and businessmen, emphasized the importance of working together to respond to the tragedy that happened at Waheen market.

The names of a number of entrepreneurs and education umbrellas were released at the function pledging $ 8,000,000 (eight Million) Dollar Disaster Relief.

Speaking on behalf of Dahabshiil, Abdirashid Mohamed Said expressed his company’s readiness to contribute to the relief efforts for the victims of the Waheen fire, and called on all businesses in the country to contribute, and take part in contributing to their part at the disaster market relief.

The Mayor of Hargeisa, Mr. Abdikarim Ahmed Mooge, also praised the business community for their dedicated work in raising funds, and called on politicians and the general public to work for the unity of the nation and to refrain from anything that could jeopardize the nation’s emergency relief efforts.

The ministers of Interior and trade, also thanked the country’s major and medium-sized businesses for their donations to the Waheen market fire disaster, which was announced tentatively.

The Minister of Religious Affairs and Endowments, who is also the chairperson of the National Waheen Relief and Support Committee, gave an in-depth account of the government’s and the public’s concerted efforts to raise funds, stating that the government has deposited funds in the Waheen market  account $ 2,530,000; and neighboring states have contributed to this fund.

The Head of State H.E. Muse Bihi Abdi concluded the meeting by thanking the business community for their patriotic and fraternal contributions to the Waheen market, and said, “Somaliland business people have come here tonight. I thank them very much for those present, and those absent too, for fulfilling their Islamic duty and of brotherhood, for fulfilling their patriotic duty, and I congratulate them very much, and I thank them profoundly”.

The president called on the community and businesses fraternity to unite and not sit back until “we reach and collect the target amount of money that the commission estimates traders who used in the market have lost in the fire”.

He added, “let us collectively continue our efforts, till we reach earmarked sum of the two billion, God willing, we will not tire”.

The President thanked all those who mourned and shared their sympathy in the Waheen market fire and expressed their solidarity with the people of Somaliland. He said as a nation, “we are grateful and indebted for their help”.