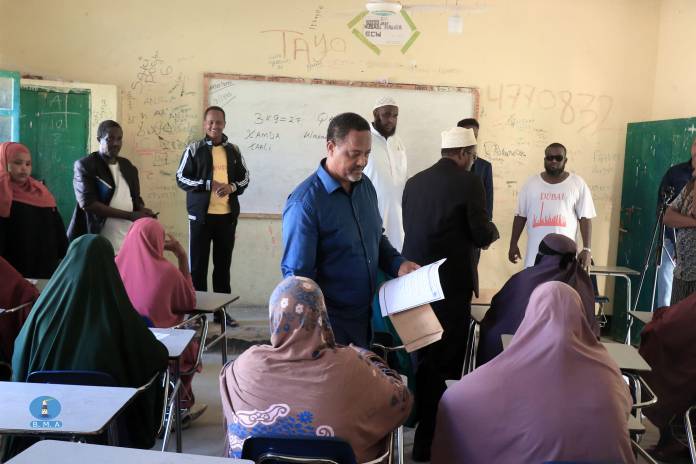 The Mayor of the Port City of Berbera Cllr. Abdishakur Mohamoud Hassan accompanied by the Sahil regional education coordinator, councillors and ministry of education officials held an inspection tour to non-formal education centres established to eradicate illiteracy
amongst the population.

The centres were sitting for their first examination following the inauguration of non-formal education in the region. Mayor Abdishakur was on a fact-finding mission to gauge the success of the program.

Addressing journalists at the venue, the education coordinator Sahil region confirmed that the government was serious about the interest of the people hence the importance of fighting illiteracy.

He revealed that the local municipal council had vehemently supported the educational initiative wholeheartedly. One of the elders confirmed that since the start of non-formal learning was initiated, many women have benefited and are now able to use mobile money transfer services without asking for help of passwords and pins.

The Mayor had this to say;  “From today onwards you will have the knowledge to read and write, and indeed it is a great milestone for people who just the other day could not write their names or read.”

Mayor Abdishakur lamented incidences whereby the elderly and women folk who could not read or write begging total strangers to help them withdraw money from their mobile accounts. He revealed that some of them fell victim to crooks and lost huge sums of their hard-earned cash.

He stated the days of asking people how much money have they withdrawn and how much remain as balance in their accounts will be history.