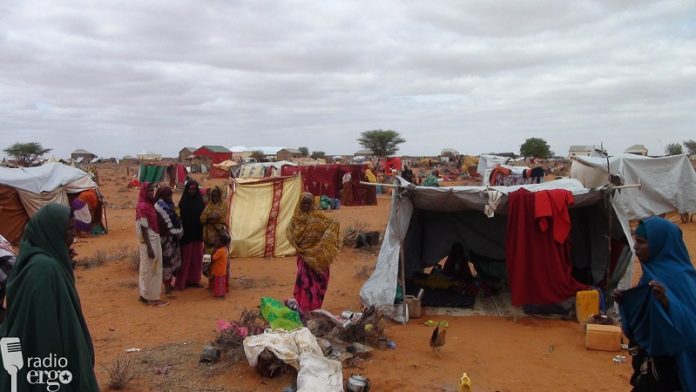 In the second part in our new weekly series on conditions in IDP camps across the country, Radio Ergo visited Bedbado camp in Bosaso. The camp has no health centre, leaving pregnant women reliant on an untrained but passionate traditional midwife.

Faduma Hassan has been delivering babies in Bedbado IDP camp, just outside Bosaso, for the last five years.

As a traditional midwife without any formal training, her help during childbirth is all that displaced women living in this camp in northeastern Somalia can rely on.

Fadumo provides her services to women free of charge to help them through their delivery, as Bedbado camp has no health post.

“I have been voluntarily helping the mothers. I don’t even ask for the soap to wash my hands after the service!” she told Radio Ergo’s local reporter.

As a mother of eight children and also a grandmother, Faduma decided to teach herself the skills of midwifery in 2014 after one of her daughters narrowly survived as she gave birth during a complicated delivery.

“I decided to become a traditional midwife to save the mothers in this camp,” says Faduma, who came to Bosaso from Dhobley in southern Somalia fleeing drought in 2010. “I have managed to learn some skills although I did not attend any classes.”

Faduma refers emergency cases to Bosaso hospital, around four km away, when she knows she has no capacity to help.

The lack of basic facilities such as health care is one of the biggest problems affecting the 1,000 or so families in Bedbado.

Most families eke out a living doing casual jobs like Ali Mataan Subane from Somali regional state in Ethiopia, who works on construction sites to support his family that has grown to eight children in the years he has been in the camp.

Ali says he would like to take them all home to Qalaafe town but has no means to return.

“Right now, we cannot afford the cost of transport to go back home. We arrived here when we were a family of two or three people, but we are now about 10,” he said.

Others like Deq Abdi Nuur, 40, have been able to set up small businesses. Deq is a metal worker, producing saucepans and other utensils using the lids and bases of old oil drums.

“I buy seven lids and bases for $2 in the market. I sell each frying pan I make for$2. I can support my family so I am satisfied with the job as far as it solves my problems,” said Deq, a father of seven, who came to the camp in 2014 fleeing conflict in his village near Kismayo.

According to camp residents and leaders, the last aid they received from CARE International of 25kg of sugar, flour and rice and three litres of oil was four months ago.