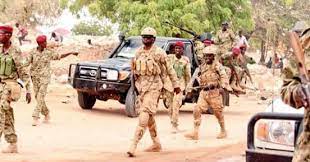 A military camp manned by troops come under heavy attack near the coastal town of Bosaso in Somalia’s region of Puntland on Sunday, officials said.

A barrage of mortar shells struck the military base on Sunday morning before assailants and regional forces exchanged gunfire near Af-Urur military camp, in an area close to Gollis mountains where fighters of the militant group operate for nearly a decade.

The Al-Qeada-affiliate said its fighters had conducted the assault and claims that Puntland troops had been ambushed after fleeing their base due to the mortar fire,

Residents in nearby villages told media that they heard mortar explosion gunfire ensued by combatants during gunfight that lasted for a period of hours.

The Al-Qaeda militant group frequently target the base, which is crucial to prevent Islamist fighters from entering the coastal town of Bosaso.

Al-Shabab militants attack and overran the military base and the village of Af-urur in Puntland in June 2017, killing many soldiers, in the deadly insurgency attack of any militant group in the region since Puntland came into existence in 1998.