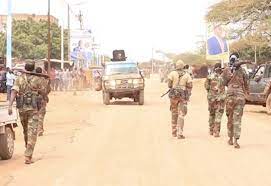 Al Shabab militants in Somalia bombed a police station, army base and the administration building of a town in central region of Galmudug, on Wednesday, hours after the militants took control other nearby towns.

The militants entered the town of Eldhere, about 30 km south of Galmudug’s capital, Dhusamareb on Tuesday night as if they continue to threaten a key regional highway.

Regional officials told that troops were sent from nearby towns of Guriel and Dhusamareb to flash out the militants.

Islamist fighters captured the towns of Mataban, Bergadid and Ba’da in Hiran region which links highway to the capital and to the north and central regions of Somalia.

The fighters pulled out hours after being in control.