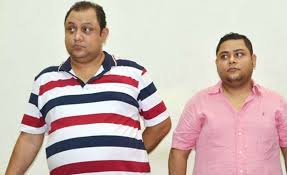 A United States court has been told of gun trade link between the Akasha family and Al Shabaab terrorist group.US Attorney Geoffrey Berman submitted in court, details of how the Akashas trafficked weapons with members of the terrorist organisation.This was a confession by the drugs empire point man Vijay Goswami who spilled the beans of what he saw and heard from Baktash and Ibrahim Akasha at their Mombasa home.

Baktash revealed to Goswami that he worked with an Italian man who was not named in court documents to negotiate with Al Shabaab.He narrated of a well-oiled system between the negotiator, ship crews and the Akasha brothers that would pass the attention of State security at a blink of the eye.Passing the State security agents was one thing, and dealing with ports officials who keenly scan each and every consignment was another.

After a deal was reached, money would be wired to the terrorist group and they would in turn supply weapons to cargo ship crews that docked at the Port of Mombasa.The Akasha brothers, the court was told, narrated to Goswami how the dare devil Ibrahim would travel to Kenya-Somalia border to purchase weapons from Al Shabaab.