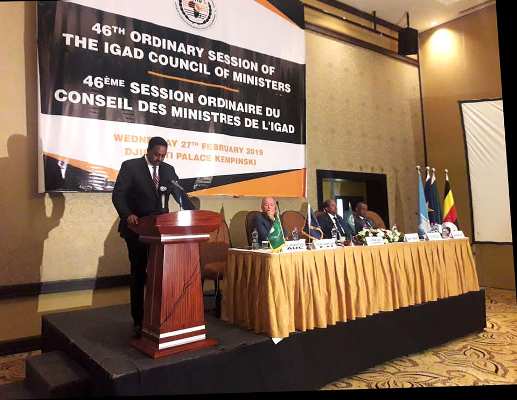 Djbouti  February 28/2019 The IGAD Council of Ministers in its Ordinary Session adopted decisions that would help to protect security and economic interests of the region.

The Council, in its 46th Ordinary Session held yesterday adopted various decisions, after extensive deliberations on the geopolitical and security dynamics of the Red Sea and the Gulf of Aden.

The communiqué that IGAD sent to ENA said the Council underlinesthe importance of expediting the endorsement of the proposed treaty and structure to reform IGAD.

It decided that there is need for enriched and continued discussion on the organizational structure and treaty of IGAD until the next ordinary sessions of the policy organs.

It agreed to harmonize and develop a common position to protect the security and economic interests of the region including maritime security, migration, fight against terrorism, prevention of illegal, unreported and unregulated fishing; pollution and dumping of the toxic waste in some parts of the waters of the IGAD region.

The Council agreed to develop a multi-disciplinary policy oriented research and analysis on the matter.

Acknowledgingthe threats, risks and challenges of geopolitical dynamics of the Red Sea and the Gulf of Aden to the Greater Horn of Africa, the Council, recognizes the need for IGAD to take a leading role on the issue.

It adopted a collective approach to challenges in the Red Sea and the Gulf of Aden by strengthening regional cooperation, and establish a regional platform for IGAD member states with a view to promote dialogue with other stakeholders including the AU and other international partners.

Appreciating the strategic interests of littoral and non-littoral IGAD member states, the Council emphasized the need to formulate shared norms, common goals and strategic coordination in this endeavor.

It directed the IGAD Secretariat to the expansion of the responsibilities of the IGAD Special Envoy for Somalia to include the Red Sea and the Gulf of Aden, in coordination with the AU as may be appropriate.

Appreciating the presentation made by the IGAD Special Envoy for Somalia on the geopolitical and security dynamics of the Red Sea and the Gulf of Aden, the Council adopted the recommendations therein.