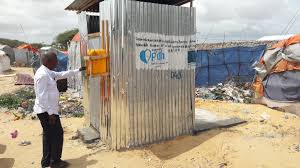 Sixty public hygienic facilities for latrines were donated to the residents of Kallah, a newly established settlement in south of the city, Hargeisa.

The facilities which will go down well in lifting up the standards of the hygiene in as far as toiletry issues were concerned, were donated to the residents by the national agency charged with refugees and internally displaced persons in conjunction with the World Vision.

The settlement has 1380 families, according to the director in charge of the internally displaced persons (IDPs) Mr. Mohamed Yusuf Ali, who was accompanied by the agency deputy chair as they visited Kallah.