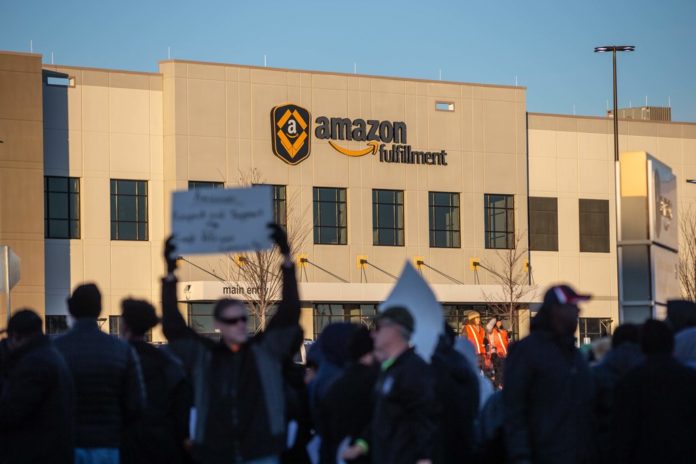 SEATTLE — Three Somali women working for Amazon near Minneapolis have accused the company of creating a hostile environment for Muslim workers and of retaliating against them for protesting their work conditions, according to a filing submitted this week to federal regulators.

In a letter with the filing, Muslim Advocates, a nonprofit legal organization representing the women, asked the Equal Employment Opportunity Commission to investigate what they argue are “systemic violations” of the Civil Rights Act of 1964. The law prohibits employment discrimination based on religion, among other things.

The federal complaint is the latest escalation in an almost yearlong dispute between Amazon and East African workers in the area, which has one of the most organized groups of Amazon warehouse employees in the country.

“We think an E.E.O.C. investigation is a key part of starting the process of holding Amazon accountable,” said Nimra Azmi, a lawyer on the case.

An Amazon spokeswoman, Brenda Alfred, said in a statement, “Diversity and inclusion is central to our business and company culture, and associates can pray whenever they choose.” However, she said, “We respect the privacy of employees and don’t discuss complaints publicly.”

In 2016, when Amazon opened a major fulfillment center in Shakopee, a suburb of Minneapolis, it recruited heavily from the region’s large immigrant population amid low unemployment. At one point it ran buses to the warehouse from a Minneapolis neighborhood known as Little Mogadishu.

For more than a year, the Awood Center, a nonprofit focused on helping East African workers, has organized the employees around their concerns about the pace of work, accommodations for prayers and what they see as little opportunity for advancement to management. Awood has received funding from grants as well as the Service Employees International Union.

Through a series of escalating actions last year, they became the first known group of workers in the United States to get Amazon management to negotiate. In December, a group protested outside one of the area’s mammoth warehouses. Local press reports estimated that 100 people had attended. And in March, a smaller group walked out on its shift for several hours.

Muslim Advocates said it had been in touch with Awood since last summer to determine whether there was a legal challenge to raise.

In the letter summarizing their claims, the women said they had faced retaliation since they were involved in the December protest. The workers said they had received difficult work assignments and improper warnings that could lead to firing. Amazon also had a “culture of surveillance after the protest,” Ms. Azmi said.

Muslim Advocates has withheld the women’s names from the public, saying they fear further retaliation. One of the women agreed to be interviewed on the condition of anonymity.

In the interview, the worker said that she had seen her manager looking at social media of the protests, and that he had then commented he noticed she had participated. Another time, a different manager took a photograph of her on his personal phone while she was working, she said, adding that when she complained, management played down her concerns.

According to the letter, one of the other women “has had her everyday conversations repeatedly video recorded by her supervisors.”

“There is zero tolerance for retaliation in the workplace,” Ms. Alfred, the Amazon spokeswoman, said. “We take any reports of retaliation seriously and look into all claims made by our employees.”

Amazon gives the workers paid breaks to pray up to 20 minutes, as required by state law, but the employees are still responsible for maintaining the same “rate,” or how many items they must pack in an hour. Ms. Alfred said workers could take longer prayer breaks without pay, for which productivity expectations would be adjusted.

Missing the rate can lead to write-ups and firing. The women said they and other Muslim workers feared taking time to pray, making it a “hostile environment” to be Muslim.