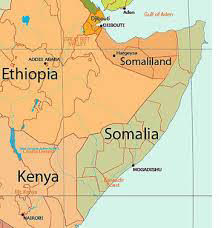 Since 1988, it seems Darood presidents of Somalia run to Ethiopia and Eritrea for help, especially for military support. Why? Do they fear or have phobia about other clans and believe that they cannot keep the office of presidency unless they get military support from Ethiopia and Eritrea or do they want to subdue and dominate other clans such as Hawiye and Isaaq with tribal dictatorship?

Late Dictator Siad Barre used to preach Somalia that Ethiopia was the existential threat of all Somalis in the Horn of Africa but he suddenly surrendered to Mengistu Haile Mariam, the dictator of Ethiopia, in April 1988 just to get help to massacre Isaaq. When Abdullahi Yussuf became president of Somalia, he immediately invaded Mogadishu with Ethiopian troops in 2007 and committed heinous crimes against Hawiye people. Mohamed Abdullahi Farmajo toppled the leadership of South West and Galgudud presidents with Ethiopian troops and sent his military recruits to Eritrea betraying his people by choosing dictatorship over democratic elections and joined enemies in 2018 against his country and his people to get military support for his tribal dictatorship by signing impractical and illegal agreements granting Ethiopia seaports through deceptive “Horn of Africa Integration.”

Siad Barre was dictator for 21 years in the then Republic of Somalia and at the end of his brutal dictatorship, he committed genocide and brought down major cities with war planes, tanks, rockets and artillery shelling. Abdullahi Yussuf prepared himself to become dictator of Somalia but Hawiye denied him of it. Mohmaed Abdullahi Farmajo is still in the office of presidency after his presidential term expired on February 8, 2021 (Almost one year in the office without mandate) to become dictator too. Since independence of 1960, Somalia is in political turmoil, crises and civil wars that generate massacres, revenge, destructions, displacements, refugees and suffering, people never had relief from fear, worries and poverty, never has there been constant peaceful progress, future of generations has been wasted and the UN and international community are fed up and tired of helping Somalia because of the devastations and hopelessness caused by tribal dictatorships.

Why do Darood presidents want to become dictators against the will of their own people and violate the constitution? Why do they seek military support for their dictatorships in Ethiopia and Eritrea? Is it because they are naturally inclined to dictatorship or less patriotic for seeking help in the archenemy of Somalis in the Horn of Africa for tribal revenge? Or is it tribal new tendencies agreed by Darood subclans after the defeat of 1991 to have revenge against Hawiye and Isaaq whenever they become presidents? or fear something unknown that forces them to become dictators and then run to Ethiopia and Eritrea for military support? These questions need answers.

This is a new phenomenon developing in the Horn of Africa in the last 30 years. It should be studied and discussed why this is happening in forums. It is clear that Ethiopia is existential enemy of all Somalis in the Horn of Africa because it is landlocked country like many other African countries and they always want to have access to the sea against the will of Somalis and even they tried before several times to have sea access with force but failed. It maybe necessary to have careful and critical examination (Presidential Candidate Vetting Process) for future presidents in Somalia and Somaliland to make sure that the presidential candidates are not inclined to enemy or to dictatorship regardless of clan affiliation in order to have peace and smooth running of governments and progress.