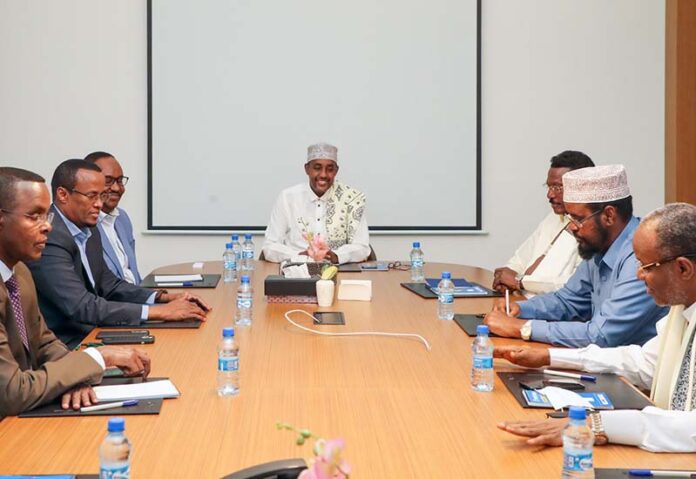 Somalia’s PM Mohamed Husein Roble and regional presidents reached a deal demanding the deployment of fresh African Union Peacekeepers to the presidential palace in Mogadishu to prevent troops loyal to Farmajo from attacking rival faction of the army protecting the PM’s office.

Roble accused President Farmajo of being responisble of a coup attempt last month.

Dozens of military vehicles deployed, at some fitted with artillery weapons gathered outside of the PM’s office, threatening they would remove the president from the palace.

Following days of talks between members of the National Consultative Council, a communique was released detailing the term of the new agreement including completion of the polls before February 25, warning troops to stay out of politics and stopping election manipulation and fraud activities.

The Prime Minister has failed in his bid to take full charge of the country’s security, a move that the opposition leaders and some of the regional presidents are looking up in favor, though it has met a stiff opposition from state leaders allied with Farmajo, risking the breakdown of election talks.

In a statement issued on Sunday night, the Council of Presidential Candidates, a conglomerate of opposition parties welcomed the new agreement and asserted that the Premier and his cabinet are responsible for the national security and that Farmajo is one of the contenders for the upcoming presidential vote.

AMISOM troops will guard both the President and Premier’s offices where troops separately allied with each men occupy rival positions on the rooftops of buildings inside the compound. The peacekeepers will not take orders from the two men and will force the rival Somali forces to dismount from the rooftops of Villa Somalia and are mandated to deter any attack by both sides in possible clashes in the heavily fortified zone.