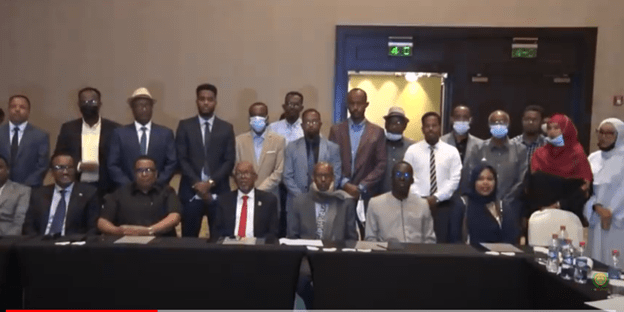 DJIBOUTI– VP Abdirahman Abdillahi Ismail Sayli’i on Sunday launched a conference on Joint Program and Local Governance (JPLG), held in Djibouti. The two- day conference was organized by UNDP and attended by mayors.  During the meeting, mayors will share ideas and will get an exposure on good-governance on local government insights. The joint program, which is led by the Somaliland Government in partnership with the UN, works to improve the lives of Somali people and promote peace through accountable and effective local government. Mayors who are currently attending the conference are drawn from the towns where the Joint Program is being implemented across Somaliland. The Director General of the Ministry of Interiors together with senior officials are also in attendance. SL Representative to Djibouti Abdifatah is also attending the Mayor’s meeting in Djibouti. In a keynote address, the Mayor of Djibouti, Ms. Fatumo Awale Osman, who is also attending the high level meeting hosted by her capital, accorded cordial reception to SL delegation. SL’s mission to Djibouti played its role when it comes to the organization of the meeting. Mr. Abdifatah thanked the government and mayor of Djibouti for the crucial role they played when it comes to this high-level meeting held for mayors. VP Sayli’i reiterated that the meeting is aimed at developing major cities. He also thanked Djibouti government and the mayor of its capital for the cordial reception that they accorded to SL delegation. It is the first time that the local governance program was held in Djibouti.