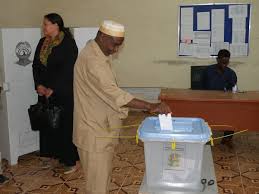 When we intend to elect new legislators, we must be sure to replace bad legislators with good legislators, otherwise we will be like “sitting ducks” just waiting to be devoured by the adversary, the devils within.

The triumph to elect decent, delligent, devoted, dedicated, and degnified parliament always lies in how well people are prepared to ensure that what went wrong in the past would not go wrong again in the future.

In times of legislative elections, what literally leads us (voters) to victory is a shared language that nurtures culture in ways that can become guiding principles that are actionable and achievable. The pathway from culture to conviction marks the beginning of an evolution; a change-making movement that will bring clarity to selfish candidates that should be out and selfless candidates who should be in (those who are naturally cash-oriented and those who are cause-oriented).

But, what if we found the courage to elect those we really liked to elect and electing them didn’t change our whole life? What if those who we elected followed the footprints of those before them and unfortunately things got very much up in the air – inflation remained unchecked, food prices skyrocketed, corruption practices continued to lead from one avenue to another avenue as before, state policies continued to remain under the control of one man’s outlook, unemployment increased and so on and so for?

It means that the battle we fought and won won’t get us there, where we wanted to reach, simply because something was wrong in the ways we, the voters, picked candidates. It means that voters have no concept of who the candidates they elected are as a people. It means voters have no clear idea of what the criteria to judge a candidate is exactly all about and could not understand by definition what a legislator is? It boils down to the fact that voters are just a bunch of scared people in kraals who voted for the candidates that are endorsed by few ignorant tribal elders, whose eyes are always glued to a candidate’s ledger account.

A representative is a lawmaker or a legislator whose first national/social responsibility is to make and pass state laws. A representative (lawmaker) can be picked by two ways: the position he/she takes on pressing issues and what change-making opportunities a candidate would contribute to his/her own constituents or to the entire nation as a whole. Why both ways are important?

Both ways are important because looking at the candidates’ background, their abilities and experiences is one of the most decisive factors in choosing one candidate over another. How well prepared are they for the job is also another important quality to pick the best candidate.

Elections always decide who makes the calls on issues people care about, and this is the reason why the public should periodically elect representatives who craft policies for the country. Every policy that impacts people is decided by representatives who are supposed to be answerable to their constituents.

A voter’s selection to vote for a candidate does not depend on what they are hearing from the candidates. Telling the voters more of the same will not change their mind. The only thing that can trigger a voter’s choice to pick a reputable and rigoorous cadidate is a combination of the sum results of a cadidate’s character.

Fake promises, hyperbolic claims, pretension, and slogans, are often all that crap which every candidate could easily come up with in campaign trails, and voters must not take for granted.

The real reward for the voter is a margin of assurance of how he/she could get the accurate evaluation and authentic information he/she requires to cast his/her vote with confidence.

Having said that, here is the big question: Do Somaliland voters basically believe their vote will make a difference?

Looking back, elections in Somaliland have been potential disappointments, if not total disasters. On practical level, democratically elected presidents and parliament members have thematically failed to live up to the demands of democracy, leave alone that they have even tried to cherish its basic principles. Corruption has flourished on unprecedented scale, instead of seeing corruption and injustice being diminshed. All elected politicians and unelected powerful public institutions like the Guurti have failed to build public trust, a vital prerequisite for a functioning democracy.

It is a must to know a candidate’s integrity and ability as a representative who could succeed to fulfill in what those before him/her failed to accomplish. But common sense suggests that there is no way to know what a candidate might hide in his/her heart of hearts?

When do we pretend? When we can make it real? We like pretending to be someone else, but the truth is that we can’t change what we are and who we are as a people. As the old gag goes to say, “The song is not the song that is being sung. The real song is the character of candidate that pretends to be someone that he/she is not”. How voters will deal with this character with dual faces is a another debate for another day.