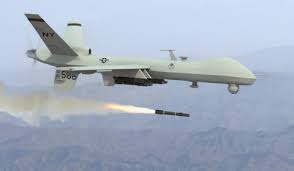 US unmanned drones fired two missiles into Al Shabab militants stronghold in central Somalia’s Mudug region where fierce skirmishes between government soldiers reinforced by provincial premilitary forces and fighter of the Islamist group of Al Shabab raged over the past couple of days, military officials confirmed on Friday. The airstrike targeted an area between Hareri Dhere and Qayad villages in central Somalia Mudug province early on Friday. The airstrike come following the request of senior military officials who are leading the offensive and the operation aimed at flushing the militants from the region have encountered heavy resistance from the militants. No casualties have not been confirmed as far as the airstrike is concerned that took place in the Mudug region. Locals have confirmed that US drones were seen flying low in the region’s airspace over the past days and air strike comes days after US launched another bombardment in Qaya’d village. The US has not claimed responsibility for the air bombardment, but it will be the second airstrike conducted in Somalia since president Joe Biden assumed the office in January. Galmudug provincial authority confirmed the air raid, and said in a statement that the air strike targeted a base home to Al Shabab fighters between Qayad and Hareri Dhere villages.