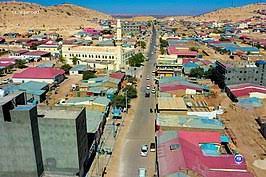 Sool’s electoral commission chief, Honorable. Abdilahi Mohmud Shire alias Laba-gole has been gunned down by unidentified armed assailants in Lasanod last night. The unknown gunmen have escaped from the scene after having carried out the assassination. The motive for the killing of Sool’s election commission chief remains unknown. Somaliland security forces have arrived at the scene of the incident and have launched an immediate investigation. There was no immediate claim of responsibility for the attack, Security officials while speaking of the assassination, said that the security forces are pursuing the perpetrators of the heinous killing and promised to bring them before the  court. Sool’s regional governor, Abdikani Mohmud Jidhe, while speaking on the killing, has commiserated the family, relatives, Sool’s locals and SL election commission for the tragic loss of Laba-gole who has been shot dead by unknown gunmen. Mr. Jidhe has informed all security agencies to investigate into the crime and bring the culprits to justice.