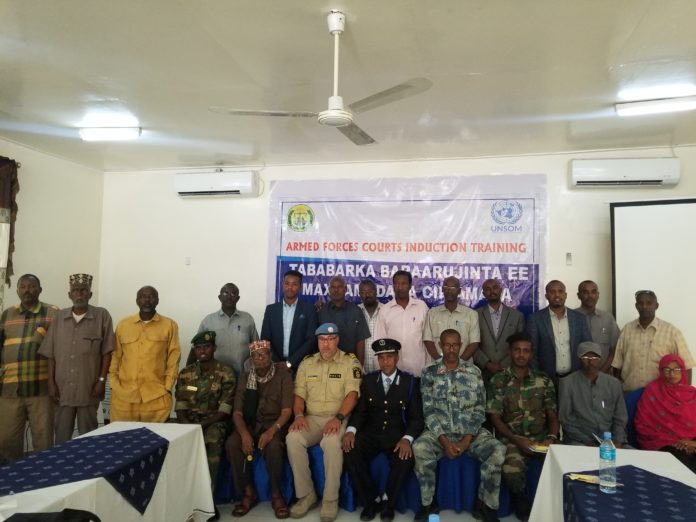 Hargeisa, 10 February 2020 – An induction training opened in Hargeisa, Somaliland, today aimed at new judges of the Armed Forces Courts (AFC) with a focus on military law, human rights and gender.

At the start of the two-day training, the head of the United Nations (UN) office in Hargeisa, Simon Strachan, highlighted the importance of upholding the rule of law, and of having an effective, accountable and transparent judiciary as a prerequisite for the protection of fundamental rights and democracy. Then, the Director of the Department of Disarmament, Demobilisation and Reintegration, Ministry of Defence, AbdilahiNuh Hassan,expressed gratitude for the UN’s continued support to the AFC.

For his part, the University of Hargeisa’s Dean of the College of Law, Prof. Mohamoud Hussein Farah, emphasized the principles of equality in rights and obligations before the law among all people, the provision for non-discrimination, and the independence of the judiciary enshrined in the Constitution of Somaliland.

On the second day of the training, human rights specialists from the UN in Hargeisa will offer guidance to the judges and prosecutors on their role in upholding human rights and the right to a fair trial. Additionally, the UN Police Adviser in Hargeisa will brief judges on maintaining a gender perspective when deciding cases before them and focusing on identifying and addressing gender stereotypes. The aim is to ensure that judges decide cases based on the principle of equality recognized under international human rights standards, including the Convention on the Elimination of All Forms of Discrimination against Women (CEDAW).

The training is the first in a series of sessions delivered by the UN to the AFC this year. The UN is also promoting the inclusion of female judges and prosecutors in the AFC.